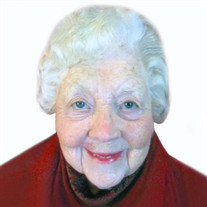 RACINE-Jeanne Carol Pie, loving wife, mother, and devoted friend, passed away Thursday, October 21, 2021, at Shorelight Memory Care. Jeanne was joyfully reunited with her husband and three sons. Jeanne entered the world 91 years ago in Racine, Wisconsin, where she spent her childhood with her parents, Ray and Helene Shannon, and her sister, Shirley. Jeanne attended Janes Elementary School, Washington Junior High, and Horlick High School. Throughout her life Jeanne's kind, polite nature was evident to everyone who came into contact with her. She never failed to say please and thank you. Jeanne met Cliff (Tip) Pie at Horlick High School. The high school sweethearts later married. The union was blessed with three sons, Jeff, Scott, and Randy. When Jeanne vowed to be Tip's wife in sickness and in health, she meant it. Diagnosed with MS in his early thirties, Tip was confined to a wheelchair by the time he was 35. Thinking a better climate would benefit Tip, the family spent four years in Tucson, Arizona, later returning to Wisconsin. Jeanne lovingly cared for her husband while raising her sons and holding a full-time job. Jeanne had a lot on her plate, but never complained. They were married 47 years when Tip passed away April 13, 1998. Jeanne tragically and unexpectedly lost all three of her sons in 2019. Some of Jeanne's favorite outings were visiting gambling casinos with her son and driving north to enjoy autumn scenery. She liked to watch Wheel of Fortune. Her favorite sports teams were the Milwaukee Brewers and the Green Bay Packers. She was a member of Faithbridge Church. Jeanne worked at Western Publishing, and at Kohl's Grocery Bakery Department, at a time when a donut was only 7 cents. While working at Kohl’s Jeanne met Vi Ydunate. The two became lifelong friends and enjoyed taking family trips together. One excursion took them to Pennsylvania. These fun adventures became wonderful memories. Upon returning from a day at the racetrack, Jeanne found herself locked out of the house. Breaking a window was not the way she expected to enter her home that night. After Vi moved to Georgia the friends kept in touch through phone calls, letters, and Christmas cards. After Jeanne's stroke in 2018 they couldn't communicate with each other, though Vi called regularly to check on Jeanne's condition. In August 2021, Jeanne and Vi were able to enjoy a phone conversation. Jeanne's friend, Sue Makowka remembers the smile on Jeanne's face when she and Vi finally got to talk to each other and reminisce. When Sue Makowa met Jeanne 33 years ago, she reminded Sue of Aunt Bee from The Andy Griffith Show. Sue described Jeanne as a friendly woman who would do anything for you, and Sue loved to do things for Jeanne. Near birthday or holiday time, Sue would think of special ways to celebrate with Jeanne. Sue and her husband, Henry surprised Jeanne for her 80th birthday with a party at their house. The surprise included a barber shop Quartet serenade. Jeanne's sons and close friends from church shared the special day with her. When Jeanne turned 85, she wanted to go to Lake Geneva to tour The Black Point. The house tour was only accessible by boat, then by climbing 121 steps that led to the beautiful 1800s home. Jeanne did it, only stopping a couple of times to rest. She said the tour was worth climbing the steps and she had a great 85th birthday. One Christmas outing was especially memorable. Sue purchased tickets to what she thought was a Christmas musical. Upon arriving at the venue, Jeanne and Sue realized that the Trans-Siberian Orchestra Christmas show was a rock and roll concert. Sue kept apologizing and Jeanne, who was in her eighties, kept saying "Oh, no, honey, this is just fine" over the ear shattering, raucous guitar and drum extravaganza. They "enjoyed" the show from the nosebleed section. They laughed for years about "Jeannie's first rock concert." Jeanne was available to listen to Sue day or night and offered excellent advice that struck just the right note. Jeanne made her last trip to Potowatomi in 2019. She loved playing the slots again. She was able to go out for dinner this past July, after being cooped up for a year because of Covid. She was so happy to be outside and going out to dinner. Sue said "It was so easy to make her happy and she brought so much joy to me over the years. She was a one-of-a-kind friend, and I will miss her. But she is with her family again and that is what she would want. Rest in Peace sweet Jeanne Pie." In addition to her husband, sons, and parents, Jeanne was preceded in death by her sister Shirley; brother in-law Jim; and many dear friends. Left to cherish Jeanne's memory are her grandchildren, great-grandchildren; and dear friends, Sue and Henry Makowka. Private services were held for Jeanne. Jeanne's family and friends wish to extend a special thanks to the staff at Shorelight Memory Care, especially Sherry and Hospice Alliance for their wonderful care and concern.

The family of Jeanne Carol Pie created this Life Tributes page to make it easy to share your memories.

Send flowers to the Pie family.