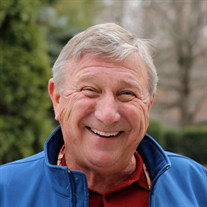 Jerome Michael Oksiuta, resident of Franksville, age 72, "affectionately known as Dr. Jerry”, passed away on Thursday, January 14, 2021 in Sarasota, FL. Jerry was born on March 18, 1948 to Jerome and Margaret (nee: Bielmeier) Oksiuta in Milwaukee, WI. He was united in marriage to Susanne Sheffield on September 25, 1976 in Oconomowoc, WI. Jerry attended St. Catherine's in Racine, graduating in 1966; Dominican College in Racine, graduating in 1968; Marquette University, DDS, graduating in 1973; and Marquette University, Pedodontics, graduating in 1975. After graduation, Jerry was employed by Racine Dental Group as a pediatric Dentist up until 2013, practicing there for 37 years. He was also a professor at Marquette University School of Dentistry. Jerry was also a lifetime member of American Academy of Pediatric Dentistry and Healthcare Network Board Member from 2004 to 2010. During his retirement and free time Jerry enjoyed golfing, reading, traveling, and above all else, spending time with his family. Jerry will be dearly missed by his wife, Susanne; children, Jay (Tricia) Oksiuta, Lee Oksiuta, and Lauren (Rick) Rasor; sibling, Perry (Terri) Oksiuta; grandchildren, Eloise, William, Gregory, Coleman and Boden. He is further survived by nieces, nephews, other relatives, colleagues, former patients and many, many dear friends. Jerry is preceded in death by his parents, Jerome and Margaret. Jerry, commonly known as Dr. Jerry or "Paca" by his grandchildren, touched the lives of everyone he met either personally or professionally. He always went out of his way to help others by serving those in need of dentistry in the community, telling a joke or buying someone a drink. His enormous heart, sense of humor, smile and generosity will be dearly missed. Aside from being with his family, Jerry passed away doing what he loved most- playing golf with friends. He took his last breath after taking his third stroke on the 18th hole while in the lead. We would like to think he finished his game with a "hey-hey" as loved ones cheered for him on the other side. A private ceremony will be on February 13, 2021 at St. Rita's Catholic Church. A celebration of his life will be announced at a later date. In lieu of flowers, please consider making a donation to one of these organizations in his memory: Healthcare Network of Racine, Marquette Cares Oral Health Fund or St. Catherine's High School.

The family of Jerome "Dr. Jerry" Michael Oksiuta created this Life Tributes page to make it easy to share your memories.

Send flowers to the Oksiuta family.