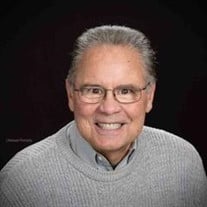 Jerry Wayne Worsham December 15, 1946 – August 17, 2020 Jerry Wayne Worsham was born on December 15, 1946 to Virgil and Alicia (Monge) Worsham in Ancón, Panama. He was the eldest of four siblings. Jerry grew up in a Christian home and was led to faith in Jesus Christ at a young age by his father. In God’s kindness, he met the love of his life, Jane (Hesters) Worsham, in middle school youth group, and felt a clear call to ministry during high school. Jerry graduated from Balboa High School in 1965. He married his high school sweetheart, Jane, on December 20, 1968, and soon after, completed undergraduate studies at Asbury University (Kentucky) in 1969. Combined with Jane’s love for the Lord, the two set out together to serve the Lord through the local church. Jerry’s first call to ministry came at age 23. He was privileged to serve as youth pastor at the Curundu Protestant Church, the same church he and Jane grew up in. Eighteen months later, Jerry received a call to the First Baptist Church of Elmhurst (1971-1976), where he served as youth pastor and associate pastor. By this time, Jerry and Jane already had a daughter, Janna, who was born in Panama, and shortly after they arrived in Elmhurst, a second daughter, Jennifer, was born. The Lord continued to equip Jerry for ministry, as he completed a master’s degree in biblical studies from Wheaton Grad School (Illinois) in 1972, and in family counseling from Loyola University (Chicago) in 1975. Then God called Jerry to Grace Church in Racine, WI, where he served as the senior pastor for the next 35 years (1976-2011). Jerry and Jane invested the best years of their lives in people—building into families, building up the church, mentoring hundreds of young ministry leaders who are scattered all over the world today, and sharing the gospel with anyone who would listen. God also gave them a heart for missions, especially in South America, where Jerry served on the board of South America Mission (S.A.M.) for 30 years. Behind Jerry’s godly life, high energy leadership, tireless efforts to advance the gospel, love for people, and his delight in his own family and grandkids stood the faithfulness and grace of God. Jerry’s love for the Lord burned brightly until his last day, and the mission of his life was simple – to live “to the praise of his [Jesus’] glory” (Ephesians 1:12). Jerry died peacefully at St. Luke’s Hospital in Milwaukee, WI on August 17, 2020, and he immediately entered heaven’s joy. His family looks forward to joining him: wife Jane Worsham (Racine, WI); daughter Janna (Tim) Augustyn (Arlington Heights, IL); daughter Jennifer (John) Binkley (Huntersville, NC). Jerry’s siblings are sister Lorain (Terry) Evans (Matthews, NC); brother Ralph (Sue) Worsham (Elizabeth, CO); sister-in-law Tammy Worsham (Center, TX). Jerry’s grandchildren are Karis, Caleb, Clay, and Kaya Augustyn; Luke and Levi Binkley; and Carter Stafford. Jerry has 10 nieces and nephews, and he was preceded in death by his parents, and his brother Arvin. You are invited to attend a memorial service for Jerry which will be held on Saturday, September 12 at 10 am at Grace Church, 3626 Hwy 31, Racine, WI. If you are unable to attend in person, the memorial service will also be live-streamed: https://www.facebook.com/graceinracine/live_videos Memorial gifts in honor of Jerry may be sent to Grace Church: www.graceinracine.com or South America Mission: www.southamericamission.org, www.southamericamission.org/worshamlegacyfund Due to COVID-19, you will need to arrive by 9:30 am, and be seated prior to the service in order to adhere to social distancing restrictions. You will also be required to wear a mask during the service. There will be no visitation or receiving line but after the service the family will be outside to greet you. A private burial will take place at Graceland Cemetery.

The family of Jerry Wayne Worsham created this Life Tributes page to make it easy to share your memories.