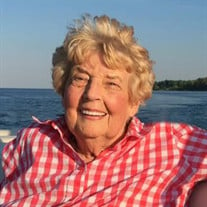 Joan J. (nee: Erickson) Milaeger, a child of God, went home to her Savior in heaven on Friday, September 7, 2018. She died peacefully at home, surrounded by family after a recent cancer illness. Joan was born in Sister Bay, WI on September 10, 1927, the daughter of the late Herman and Mayme (nee: Witalison) Erickson. Her family moved to Racine in 1942 when her father became the keeper at Wind Point Lighthouse. Joan was a 1945 graduate of Wm. Horlick High School and was honored with their "Graduate of Distinction" award in 2008. On January 18, 1947, Joan was united in marriage to Daniel Milaeger at St. John's Lutheran Church. She was an active member of St. John's for more than 70 years and sang in the choir for 27 years. Joan also was a member of Racine Yacht Club, Friends of Plum and Pilot Islands, and many garden center organizations. Joan and her husband Dan were the founders of Milaeger's Garden Mart, which they founded in 1960. She remained active in the Milaeger's stores and greenhouses throughout her life. Joan and Dan loved being on the Great Lakes and enjoyed many excursions with family and friends. Joan loved cooking and made wonderful home-cooked meals for the family daily. She will be deeply missed by her daughter, Kristine (Dan) Reisdorf and their children, Eric (Eileen) Reisdorf, and their children, Daniel and Olivia Reisdorf; Kara (Philip) Kading and their children, Liliana, Sofie and Charles Kading; Joan’s twin sons, Kent (Robin) Milaeger and their four children, Rebecca (Doug) Stillman and their children, Isaac Schultz, River, Soren and Esme Stillman; Holly Milaeger, Stephen Milaeger and Stewart Milaeger; and Joan’s other son Kevin (Susan) Milaeger and their son, David (Elsa) Milaeger and their daughter, Lucy. Further survived by a sister-in-law, Faye Erickson, nieces, nephews, other relatives and many friends. Joan was preceded in death by her husband, Daniel on September 12, 2007, brothers, Charles Erickson and Harry (Dorothy) Erickson; sisters, Helen (Doug) Carlson and Lois (James) Gordon; sister-in-law, Betty (Walter) Milaeger-Pinnow. Funeral services for Joan will be held at St. John's Lutheran Church, 1501 Erie Street on Friday, September 14, 2018 at 10am with Rev. Jack Gilbert officiating. She will be laid to rest at Graceland Cemetery. Visitation at St. John’s Lutheran Church, Thursday, from 4pm until 8pm and on Friday from 9am until 10am. Memorials to Friends of Plum and Pilot Islands, St. John's Endowment Fund or St. John's Renovation Fund are suggested. A special thank you to Dr. Mark DeCheck and his wife, Carole for friendship and care and to Hospice Alliance. Online condolences can be expressed at www.sturinofuneralhome.com

Joan J. (nee: Erickson) Milaeger, a child of God, went home to her Savior in heaven on Friday, September 7, 2018. She died peacefully at home, surrounded by family after a recent cancer illness. Joan was born in Sister Bay, WI on September 10,... View Obituary & Service Information

The family of Joan J. Milaeger created this Life Tributes page to make it easy to share your memories.

Send flowers to the Milaeger family.