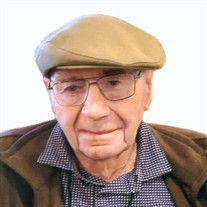 John J Kuiper, age 94, passed away peacefully at Elizabeth Residence in Franklin, WI on September 28, 2021. He was born on September 16, 1927 in Franksville, WI to John J. and Winifred (Reyenga) Kuiper. He graduated 8th grade from Racine Christian School in 1941 and began farming on the family farm. At the age of 22 he started his real passion of becoming a truck driver for the next forty years. In addition, he taught truck driving classes at Gateway College on Saturday mornings. He retired at the age of 62 from Express Freight Lines and was a proud Teamster member. After retirement he enjoyed part time employment with Lakeview Pharmacy and he delighted in golfing, volunteering for the skill bank and his trucker and Wednesday morning breakfasts. He married Maggie Jacobs on March 16, 1951. They raised four children together, Randy, Dann, Tom and Bonnie. When grandchildren started arriving John drove his Mrs. all over for long weekend visits. In John’s earlier years he enjoyed bowling, fall fishing trips to Lake Owen, and was a church deacon for many years. He also was on the Harvest Outreach team in Racine. After Maggie’s passing in 2014, John enjoyed his Tuesday night dinners with his Found/Lost men’s widow group. You could often find him at McDonald’s on any given day and he never turned down an invite for a homemade meal. Word search books became his favorite pastime. He averaged two pages per day and always dated them for his own validation of completion. In 2018, Elizabeth Gardens in Racine became his new home. John became a bingo champion several times, enjoyed wonderful field trips and Christmas parties. He had many smiling faces to converse with. He loved Wheel of Fortune, The Weather Channel and his music stations. John never missed his Friday night happy hours. Left to mourn his passing are his four children, Randy, Dann, Tom and Bonnie and their families. John had eleven grandchildren and eleven great grandchildren whom he loved with all his heart and kept them in his prayers. John was preceded in death by many siblings and in-laws. Preceding him in death was his dear wife, Maggie Kuiper in August 2014 and his first daughter, Bonnie Jean, in 1953 at the age of fifteen months. The family sends a special thank you to the staff of Elizabeth Gardens in Racine and Elizabeth Residence in Franklin, WI and Badger Hospice for their compassionate and loving care of our dad. In lieu of flowers, the family asks that donations be made to RACINE CHRISTIAN SCHOOL, it was really a place John held near and dear to his heart. Funeral service will be held at Racine Christian Reformed church on Monday, October 4, 2021, at 11 a.m. with Pastor Anson Veenstra officiating. There will be a visitation at the church from 9:30 a.m. until time of service. John will be laid to rest with Maggie at West Lawn Memorial Park.

John J Kuiper, age 94, passed away peacefully at Elizabeth Residence in Franklin, WI on September 28, 2021. He was born on September 16, 1927 in Franksville, WI to John J. and Winifred (Reyenga) Kuiper. He graduated 8th grade from Racine... View Obituary & Service Information

The family of John J. Kuiper created this Life Tributes page to make it easy to share your memories.

Send flowers to the Kuiper family.