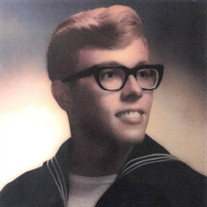 Jonas Theodore Schommer CALEDONIA - Jonas Theodore Schommer, 72, passed away on Wednesday, April 22, 2020 at his residence. He was born in Racine on January 25, 1948, the son of the late Jonas Stanley and Olga (nee: Wagner) Schommer. In 1965, Jonas enlisted in the United States Naval Reserve, while still attending Wm. Horlick High School. After graduation in 1967, he was assigned to the Commander Naval Forces Marinas, Guam. He spent two years and two months on active duty, and then returned to Racine, where he started working at S.C. Johnson Wax. Jonas held various positions while working at the downtown facility, and at Waxdale. He retired as a pipefitter, a job which he loved very much. Jonas started building small wood projects after his retirement. He was a member of the local Musicians Union for many years, playing drums and singing. Jonas and his wife, Joyce enjoyed their cottage on Hancock Lake for many years. He loved fishing and hunting, until his medical ailments reduced his mobility. Jonas spent his last years in his power wheelchair, always doing something in his garage. He is survived by his wife, Joyce Lois Schommer; daughters, Barbara LaFaive, Tammy (Tommy) Ashley, Jane (Neil) Petersen, and Jill (Peter) Schuette, son, Jonas Richard (Nancy) Schommer, many grandchildren, and great grandchildren, brother, Richard (Hanh) Schommer, and his sister, Barbara (Rick) Clark. He is further survived by other relatives and friends. Jonas was preceded in death by his grandson, Jacob Flick, and his son-in-law, Justin LaFaive. In keeping with Jonas' wishes, private burial and service will take place at West Lawn Memorial Park.

The family of Jonas Theodore Schommer created this Life Tributes page to make it easy to share your memories.

Send flowers to the Schommer family.