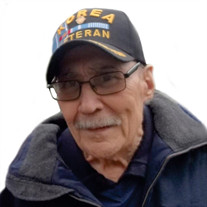 RACINE - Jose 'Joe' M. Olivares, Sr., 88, passed away at his residence on Saturday, July 6, 2019, with his son by his side. He was born in Devine, TX on July 19, 1930. On December 20, 1958, Joe was united in marriage to Ernestina De La Pena. He proudly served his country in the United States Army, serving in Korea, from 1949 to 1953. He received two Purple Hearts, and three Battle Stars. Joe was a Milwaukee Brewers fan, and enjoyed caring for his yard, fishing, and camping. Surviving is his son, Jose (Jessie Pilfold-Olivares) Olivares, Jr., grandchildren, great grandchildren, his sister, other relatives and friends. Joe was preceded in death by his wife, Ernestina on December 25, 2017; his daughters, Diana Olivares on December 25, 2014, and Yvonne Olivares on September 23, 2015, his parents and many brothers and sisters. Mass of Christian Burial will take place at St. John's Catholic Church, 415 6th Ave, Antigo, WI 54409, on Friday, July 19, 2019 at 1 p.m. There will be a visitation at the church from 12 noon until time of Mass. He will be laid to rest next to his wife at Queen of Peace Cemetery in Antigo, with full military honors. Joe's family would like to thank Heartland Hospice for the wonderful care that they provided for Joe.

The family of Jose "Joe" M. Olivares created this Life Tributes page to make it easy to share your memories.

Send flowers to the Olivares family.