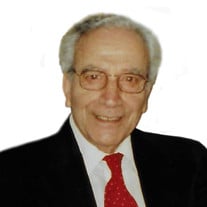 Joseph P. Joe Sturino, 99, passed on Wednesday, August 21, 2019 at his home. Joe was born in Kenosha on March 28, 1920, the son of the late Frank and Frances (nee: DeMarco) Sturino. Joseph was united in marriage to Carmella L. Fumo in Kenosha at Holy Rosary Catholic Church on June 9, 1945. He had been employed with American Motors in the Planning Dept. Jeep Division for more than 40 years, retiring in 1980. He also worked part-time at A&P Grocery for 23 years, later at Kappus Bakery and Mid-City Outdoor Theater as a part time manager. Joe was devoted to his children, grandchildren, and great grandchildren and for many years hosted a brunch every Sunday for those who could come. He was a member of the Italian American Club for more than 50 years where he especially enjoyed playing on the Champion Cicchini Bocce Ball Team and working on fund raisers. Joe was a longtime member of St. Therese Catholic Church where he was a volunteer at the soup kitchen for over 30 years. He also enjoyed working at the St. Therese festivals and other church fundraisers. Joe enjoyed gardening and walking at the Boys and Girls Club and in the winter you would find Joe and Carmella swimming most mornings with their senior friends. In the summer you could find them on the golf course and Joe was especially proud of his Hole-In-One. Every Friday and Saturday for many years Joe and Carmella could be found dancing the night away at many dance clubs in the Kenosha, Racine and Milwaukee area. They also liked to go to the Casinos and travel. They took many cruises and road trips seeing the sights in their country that they loved so much. Joseph is deeply missed by his four children, Pat (Terry) McGovern of Kenosha, Frank (Mary) Sturino of North Carolina, Tim (Laura) Sturino of Kenosha, and daughter JoEllen Sturino of Kenosha; eight grandchildren, Kevin (Jeshila) McGovern of Savage, MN., Kathleen (Phil Sikorski) of Menomonee Falls, WI., Joseph (Charissa) Sturino of Madison WI., Jessica (Steve) Floyd of Raleigh, N.C., Michele Sturino of Salem, WI., Angela (Allen) McKillips of Paddock Lake, WI., Amie Jo ( Mike) Durkin of Silver Lake, WI., Kristy Nichols of Waukegan, and Tim Sturino, Jr. of Burlington; 16 great grandchildren, Brandon, Zachary, Justin, Joscelynn, Alexis, Grace, Alexandra, Carson, Quinn, Francesca, Cassandra, Addisson, Amelia, Mya, Gabriel, and Logan. He is further survived by a sister-in-law, Delores (Jim) Lass of Green Bay, many nieces, nephews, other relatives and dear friends in Kenosha, Racine and the surrounding communities. Joe was preceded in death by his beloved wife Carmella, two sisters, Elizabeth Sturino, and Philomena (Tony) Sciarra, four brothers, Ernie, Santo, twin brother Sam, and Tony; brothers-in-law, and sisters-in-law, niece Pearl Gallo and nephews Ralph and Michael Sciarra, A Mass of Christian Burial will be celebrated at St. Therese Catholic Church, 9005 22nd Ave. on Friday, August 30, 2019 at 11 am with Rev. Robert T. McDermott officiating. There will be a visitation at church from 9:30 until mass time. Following mass Joe will be laid to rest at All Saints Cemetery/Mausoleum. Joseph’s family would like to express their sincerest gratitude to Dr. Giuseppe Garretto, Gina Bonn, and Aurora at Home Nurses, for the care they gave him.

Joseph P. Joe Sturino, 99, passed on Wednesday, August 21, 2019 at his home. Joe was born in Kenosha on March 28, 1920, the son of the late Frank and Frances (nee: DeMarco) Sturino. Joseph was united in marriage to Carmella L. Fumo in Kenosha... View Obituary & Service Information

The family of Joseph P. Sturino created this Life Tributes page to make it easy to share your memories.

Send flowers to the Sturino family.