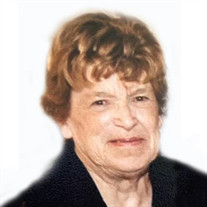 Kathryn Ann Eckardt, 85, passed away on Saturday, May 1, 2021. Kathy was born on September 24, 1935, to Harry and Lorena (Cotter) Kearns. She graduated from Montello High School in 1953 and within a few years moved to Milwaukee where she worked at Northwestern Mutual Life. While in Milwaukee, she met her future husband, John Herman Eckardt, and they were married on May 14, 1960 at St. Andrew's Catholic Church in Pardeeville, WI. Kathy was a longtime resident of Racine, Wisconsin, and a member at St. Paul the Apostle Catholic Church. Kathy’s greatest loves were her husband, her children, her grandchildren, and the Green Bay Packers. Kathy will be deeply missed by her children, Margaret 'Peg' (Jack) Hugasian and their children, John, and Madolyn of Racine and Patrick of Milwaukee, Peter (Trish) Eckardt and their son, Maximilian, all of Western Springs, IL, and Timothy (JanEllen) Eckardt and their daughters, Parker Jane and Evelyn, all of Kent, WA; her sister Rose Ann (Walter) Brunsman, brother in law Vincent Metcalf, sisters in law and one brother in law Mary (Maurice) Kearns, Eva (Pietro) DePasquale, Christa Juninger, Margaret (Helmut) Prigl, Herman (Inge) Eckardt, and Inge (Fred) Eckardt. Kathy is further survived by many nieces, nephews, other relatives, and many friends, including her best friend of over 50 years, Marlene Pias. Many thanks to Kathy’s caregiver and friend, Michele McNicholas, for the love and care she provided. She was preceded in death by her parents; husband; daughter-in-law, Donna (nee: Sawyers) Eckardt; two brothers, Maurice Kearns and James (Joanne) Kearns; two sisters Mary Metcalf and Jean (Henry) Rosmonowski. Private funeral services were held, and burial was at West Lawn Memorial Park. Donations are requested to Kathy’s favorite charity, Saint Paul the Apostle Catholic Church, c/o In Memory of Kathryn Eckardt, 6400 Spring St., Racine, WI 53406 or visit their website at www.stpaulracine.org.

Kathryn Ann Eckardt, 85, passed away on Saturday, May 1, 2021. Kathy was born on September 24, 1935, to Harry and Lorena (Cotter) Kearns. She graduated from Montello High School in 1953 and within a few years moved to Milwaukee where she worked... View Obituary & Service Information

The family of Kathryn Ann Eckardt created this Life Tributes page to make it easy to share your memories.

Send flowers to the Eckardt family.