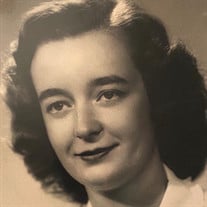 Kathryn Hinderer Heide SOMERS - Kathryn Jeanette Hinderer Heide was born into eternal life on November 1, 2019. She was born on July 12, 1931 in Steele, North Dakota to Rev. Eugene G. Hinderer and Melva C. (Woodwick) Hinderer. She began her education in Tappen, North Dakota and moved with her family to Bristol, Wisconsin in 1938 and continued her schooling in Bristol and Kenosha. In 1947 her family moved to Hartland, Wisconsin where she graduated from Hartland High school in 1949 as class valedictorian. After completing teacher training at Dr. Martin Luther College in New Ulm, Minnesota, in 1952 she received a call to establish a parochial school at Grace Lutheran Church in Yakima, Washington where she taught for two years. Following the death of her father, Kathryn moved to Kenosha in 1954 and taught at Southport Elementary School for one year. On December 20, 1955 she was united in marriage to Charles H. Heide at Zion Evangelical Lutheran Church in Hartland, Wisconsin. They were blessed with over sixty-three years of marriage and four children. From 1955 through 1965, Kathryn taught music in the schools of Kenosha County, enthusiastically sharing with her students music of all genres from classical to rock and helping to establish the annual Kenosha County Musical Festival. She received her education degree from Dominican College of Racine, Wisconsin in 1961 and returned to the elementary classroom, teaching at Berryville School from 1965 to1980, followed by Bose School until her retirement in 1993. Kathryn was a master teacher, serving on many curriculum committees and mentoring student teachers. Her students were motivated to pursue excellence in the classroom with her favorite motto, “Good, better, best! Never let it rest ‘til your good is better and your better, best!” She was a member of the teaching sorority Delta Kappa Gamma, the Racine/Kenosha Reading Teacher Council, and the Schubert Music Club. Kathryn received her Masters of Arts in Education degree from Carthage College in 1982. After her retirement in 1993, she continued inspiring students as a Battle of the Books coach at Bethany Lutheran School. During her “retirement” she was able to enjoy many years of travel with her husband Charles and “snow-birding” in Apache Junction, Arizona. Kathryn is survived by her husband Charles; children Kathryn (Timothy) Thompson, Krista (Lloyd) Reck, Charles, Jr. (Ann) Heide, Paula (Louis) Heide-Poggenburg; grandchildren Emma Jung, Marra (Gregory) Dietsche, Petra Jung (Tony Travanty), Kristen (Joel) Diestler, Loren (Maggie) Thompson, Adam Reck (Anna Johnston), Steven Thompson (Exie Lambert), Madeleine Heide and William Heide; great-grandchildren Jackson, Owen and Clayton. Kathryn is further survived by her sister-in-law Raeola Walker; nephew Danna (Donna) Hinderer and niece Jeana (Darryl) Sturino; great-nephew Daryle Sturino (Amy Vanderheyden) and all other members of her extended family. She is also survived by her dear friend Janet Hermann and her many other beloved colleagues in the Kenosha schools. She was preceded in death by her father Eugene and mother Melva, brother Daryle, niece Christine, and her dear friend Iris Helman. Kathryn was a faithful member of Bethany Lutheran Church for many years. She will be missed for the joyful and faithful way she lived her life. Kathryn Heide never failed to put the needs of others ahead of her own. God’s Word informed and guided her in every moment of each day. “Trust in the Lord with all thine heart, and lean not unto thine own understanding. In all thy ways acknowledge Him, and He will direct thy paths.” (Prov. 3:5-6) KJV Funeral services for Kathryn will be held at 3:00 P.M. on Wednesday, November 6, 2019 at Bethany Somers Lutheran Church, 1520 Green Bay Road with interment to follow at Oakwood Cemetery. A visitation with the family will be held at the church on Wednesday from 1:00 P.M. until the time of service. Memorials may be directed to the Wisconsin Evangelical Lutheran Synod Mission fund (WELS-Missions) or the Martin Luther College Building Fund. The family of Kathryn would like to acknowledge the loving and faithful care of her “Dream Team Caregivers”; Nancy, Ginger, Wendy, Sandy, Lisa, and Danni, and the staff of Allay Hospice.

The family of Kathryn Jeanette Heide created this Life Tributes page to make it easy to share your memories.

Send flowers to the Heide family.