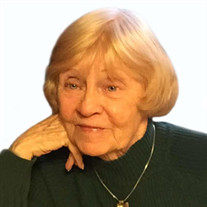 Lani Braley (nee Wohlust) August 1, 1944 – October 30, 2021 On Saturday, October 30, after battling numerous health problems, Lani Braley (nee Wohlust) passed away peacefully, in her home, surrounded by family. For most reading this you’ll probably pronounce her name wrong. Everyone who knew her has heard it happen and it became somewhat of an inside joke. She was born in 1944, when her father was stationed in Hawaii during WWII. The name Leilani is common in Hawaii and her father, liking the name, shortened it to Lani (pronounced Lonnie.) At 15, Lani started working at the Venetian Theatre as a candy girl. She was later promoted to head candy girl, traveling between the Rialto and Venetian Theatres. She then became the front desk clerk at the YMCA where she met, and later married, William Braley in 1966. They moved to the Chicago suburbs and had 2 daughters, Lorelei and Marnie. It was a brief marriage and in 1969 she moved back to Racine, found a job as a secretary at the Blaha Muth Advertising Agency and began raising her 2 daughters on her own. In 1974, wanting to give their father more time with his children, Lani moved herself and her daughters to Norfolk, CT, where she worked as a clerk in a small gift store. In 1981, after her ex-husband was transferred to Florida, she decided it was time to go back to Racine where she would live the rest of her life. In January 1983 she started working as an Estimating Secretary at Modine Manufacturing and that is where she would work until she retired in October 2006. Lani spent many happy years volunteering as a makeup artist at the Racine Theatre Guild where she met many lifelong friends. She loved supporting the local veterans (many of them old classmates who served in the Vietnam war) and volunteered to apply the bronze paint and makeup to the soldiers who pose on the parade floats. She always said she loved to bronze the vets. And, speaking of parades, every single family member has witnessed her loud displays of joy (and whooping and clapping and dancing) whenever the Kilties marched by. At age 19, in early 1964, before birth control or Roe v Wade, Lani found herself pregnant. A family doctor suggested a maternity home in Florida where she would be given room and board in exchange for giving her baby up for adaption. She gave birth to a daughter in December 1964 and moved back to Racine. But Lani never stopped thinking of her daughter, and in 1998 her lifelong wish came true when she was reunited with her daughter Robin, who was welcomed into the family. They maintained a close and loving relationship until the end. Lani spent her retirement years doing the things she loved. Going to movies, having lunch with her sisters or old classmates from Horlick High School. Baking cookies with her grandchildren, going to Vegas and National Parks. Tending her flower beds and cooking holiday dinners. She was a member of Covenant Presbyterian Church, and enjoyed Sunday services, knitting with the church group, and chair yoga. But most of all she loved spending Sunday afternoons in her sunroom watching NASCAR or Packer games. Lani is survived by three loving daughters, Robin (Jerry) Lillard of McAllen, TX, Lorelei (Tom) Smith of Oak Creek, WI, and Marnie (Michael Fisher) Hidde of Mt. Pleasant, WI. Six grandchildren: Jacob and Hannah Lillard, Paige and Maxwell Hidde, and Jordan and Dylan Smith. Also survived by her sisters Autumn (John) Lenart and Paris (Tashe) Bozinovski, brother-in-law, Robert (Melody) Carter, as well as nieces and nephews Kerry (Rachael), Scott (Isabel), Chad (Kristy), Michael (Sheila) Carter; Brea and Brett Lenart; and Erika Bozinovski and Alyssa Minger. Lani was preceded in death by her parents “Kerry” and Aileen “Skip” Wohlust and her sister Melody Carter and many dear aunts and uncles and cherished family and friends. The funeral service will be held at Sturino Funeral Home on Friday, November 5, 2021 at 6:00pm with visitation from 4:30 – 6:00pm. The family would like to give a special thanks to Marnie Hidde, who lived with Lani during the last week of her life. This made it possible for her to be comfortable in her own home until the end. And to Compassus Hospice for all their support.

The family of Lani Braley created this Life Tributes page to make it easy to share your memories.

Send flowers to the Braley family.