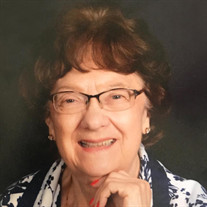 Oshkosh – Lois M. Dahl, age 88, passed away on Wednesday, May 13, 2020, in Oshkosh at Lakeshore Manor, of complications due to Alzheimer’s disease. A daughter of Ross and Mary Schultz, she was born March 30, 1932 in Kenosha, Wisconsin. She married Kenneth W. Dahl on August 18, 1951. Together they raised three boys. Lois was an amazing hard-working woman. In her younger days she worked full time for Western Publishing, then later for Zahns Department Store, where she became the head of the human resource department, all while raising three young boys and running the house. She was a fantastic cook and loved to bake; her pies and Swedish meatballs were the best! She also enjoyed knitting, bowling, and didn’t even mind going out fishing with her husband and boys. After the sudden passing of her husband she decided to move to their second home they purchased in Clearwater, Florida in 1983 where she resided until 2016. She worked in the Clearwater School District until her retirement, after which she worked as a caregiver for the elderly. She was involved in the Lutheran church, the Red Hat Society, and did much traveling, including trips to Europe, Hong Kong, and many other destinations in the United States. Her biggest joys of her life were her grandchildren. She was very involved in their lives from the time they were babies until their later years attending concerts, plays, and sporting events. Lois is survived by her sons, Kenneth A. Dahl (Mary), David Dahl, and Robert Dahl; her grandchildren, Vince and Evan Dahl (Robert), and Kimberly Dahl (Kenneth and Mary); her half-sister Mary Lou Schultz; as well as many nieces and nephews. She was preceded in death by her beloved husband Kenneth W. Dahl, her father Ross Schultz, mother Mary Schultz, and brothers Steve, Vince, and Alan Schultz. A private service was held on May 15, 2020 at Sunset Ridge Cemetery in Kenosha, Wisconsin where she was laid to rest. We would like to thank all the caregivers at Lakeshore Manor for their compassionate care during the last days of her life. We would also like to thank Lisa with Hospice for her guidance and compassion to help us through the last days of our mom’s life. Her mind and body are now at peace, but her spirit will live on in all of us.

The family of Lois M. Dahl created this Life Tributes page to make it easy to share your memories.

Send flowers to the Dahl family.