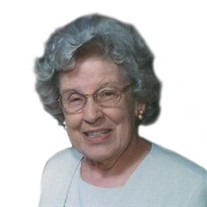 RACINE - Lorain Delores (nee: Perkins) Thellefsen, 96, passed away on Tuesday, June 25, 2019 at St. Monica’s Assisted Living. She was born in Racine on October 28, 1922, the daughter of the late Willard and Dagney (nee: Christensen) Perkins. Lorain worked at several places over the years, such as Western Printing, Nelson's Five and Dime Variety Store, and Belle City, where she met Howard Thellefsen. She was united in marriage to Howard on January 17, 1942. Lorain was a member of Gethsemane Lutheran Church. Surviving are her children, Allan (Ann) Thellefson of Libertyville, IL, Brian Thellefsen of Racine, and Janet (Brian) Hess of Florida; five grandchildren, Paula (Brent) Smith, Sarah Thellefson, Kyle (Becca) Thellefsen, Adam Hess, and Scott (Toni Lee) Thellefsen; five great grandchildren, Jacob, Camden, Mason, Olivia, and Lola. She is further survived by nieces and nephews. Lorain was preceded in death by her loving husband, Howard, brother, Eugene Perkins, sister, Constance Eggen, and step-father, Michael Schmitz. Funeral Services will be held at Sturino Funeral Home on Friday, June 28, 2019 at 7 p.m. There will be a visitation at the funeral on Friday before services from 5 p.m. until time of service. Private burial will be in Graceland Cemetery. In lieu of flowers, memorials to one’s favorite charity have been suggested.

The family of Lorain Delores Thellefsen created this Life Tributes page to make it easy to share your memories.

Send flowers to the Thellefsen family.