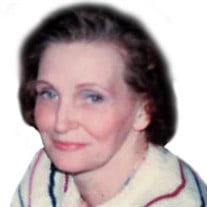 HALF MOON BAY, CA - Mardella June (nee: Jung) Proffitt, 92, passed away at her home on Sunday, October 13, 2019. She was born in Racine on March 21, 1927, the daughter of the late Peter and Ella (nee: Criplean) Jung. Mardell (as she liked to be called) was a graduate of Wm. Horlick High School. After high school, she moved to Chicago for a short time where she worked making fur coats and as a "hand model". She returned to Racine where she worked as a Dental Assistant. She moved back to Chicago, and during this time she married. She later moved back to Racine to raise her children. She was a homemaker and worked other various jobs. At the age of 43, she went back to school, and became a Licensed Practicing Nurse. While in nursing school, Mardell was a volunteer at the Great Lakes Naval Hospital spending time with wounded sailors to boost their morale, and as a volunteer with the Red Cross. After graduating as an LPN, she worked for Lincoln Village Convalescent Center in Racine. She moved to San Mateo in 1980 and worked at Mills Hospital up until her retirement in 1995. During her career as a nurse, she wore her nurses cap with pride. On October 7, 1995, Mardell was united in marriage to Earl Dubas in Half Moon Bay, CA. They honeymooned in Canada. She was a member of Second Presbyterian Church when in Racine, and also a member of the Ladies Guild, and Community United Methodist Church in Half Moon Bay. She and Earl hosted many events put on by their church and she was involved in the Women's Club. She loved to fly airplanes (but did not continue that pursuit). She was an avid reader of books, and enjoyed receiving and writing letters. Mardell was talented at making quilts, sewing, and knitting sweaters, and making Raggedy Ann and Andy Dolls for her grandchildren and to sell at the church bazaar. She made Barbie doll clothes for her daughters when they were growing up. She enjoyed gardening and caring for her many houseplants (over 100 at one point), and making desserts. She collected antique tea cups and giraffes. Mardell and Earl loved to travel the world. They have seen China, Hong Kong, and Europe, as well as train trips through the U.S. and Canada. One of the things she loved most was "coming home" to Racine to see her large family as well as several life­ long dear friends. She had not been able to come home for the last 3 years due to health issues that made travel difficult. She will be missed by her husband, Earl; children, Terry (Rick) Debe, Andrea Gatzow, Judy Gage, Brian (Catherine) Proffitt, Carol Reynolds, and Patricia Robbins, 6 granddaughters, 4 grandsons, 29 great grandchildren, 9 great great grandchildren; siblings, Donald Jung, Helen Rapaelian, Willard Jung, Lucille Robbins, and James Jung. She is further survived by numerous other relatives and dear friends. Mardell was preceded in death by her parents Peter and Ella, former husband, Andrew Proffitt; granddaughters, Rebecca Gatzow, and Cheryl Jonk; great great granddaughter, Talynn Johnson, four sisters, five brothers­ in-law, and two sisters-in-law. Funeral services for Mardell will be held at Sturino Funeral Home on Wednesday, October 23, 2019 at 11 a.m. Visitation will take place at the funeral home from 10 a.m. until the time of service. A memorial Luncheon will take place following the service. Memorials to the family are suggested. Mardell's family would like to thank Pathways Hospice Care, especially Bette, Gloria, and Susan for their loving and compassionate care that they gave her.

The family of Mardella June Proffitt created this Life Tributes page to make it easy to share your memories.

Send flowers to the Proffitt family.