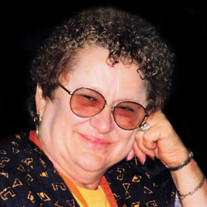 Mary Ann (nee: Ludwig) Brown RACINE - Mary Ann (nee: Ludwig) Brown, 79, passed away on Saturday March, 14, 2020 at Oakridge Care Center in Union Grove. She was born in Kenosha, WI on August 29, 1940 the daughter of the late Michael and Mary (nee: Mosal) Ludwig. On January 16, 1965, Mary Ann was united in marriage to Wesley Brown in Paddock Lake. For over 40 years, Mary Ann was an Avon Representative serving the Kenosha and Racine areas. She found great enjoyment in cooking, especially making pies. She especially enjoyed and found great satisfaction in preparing and serving Thanksgiving dinner to her extended family. Mary Ann is survived by her sons; Daniel (Steph), Charlie, Michael and David (Janet) Brown. She is further survived by her grandchildren, Alyssa, Tiffany, Tony, Dylan and Gavin and daughter-in-law, Peg Brown in addition to other relatives and many dear friends. Mary Ann was preceded in death by her husband, Wesley on March 9, 2007, and her sons, Dean on April 26, 2015 and Donald in 2017. Funeral services for Mary Ann will be held at Sturino Funeral Home on Thursday March 19th, 2020 at 11 a.m. with Candi Evans officiating. Visitation will be held at Sturino Funeral Home on Wednesday from 5-7 p.m. and Thursday from 10 am until service time. She will be laid to rest next to her husband at St. George Cemetery in Kenosha. In lieu of flowers, those wishing to remember Mary Ann in a special way may direct memorials to The Alzheimer’s Association. Mary Ann’s family would like to take this opportunity to publicly express their profound gratitude to Oakridge Care Center as well at the entire staff for their thorough and attentive care.

The family of Mary Ann Brown created this Life Tributes page to make it easy to share your memories.