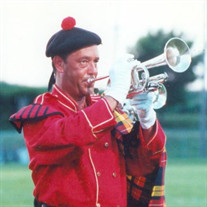 Michael ‘Mike’ Louis Kaufman RACINE- Michael Louis Kaufman, 71, passed away on Thursday, April 29, 2021 at his residence, surrounded by loved ones. Mike was born on September 15, 1949 to Donald and Anne (nee: Dorse) Kaufman in Racine. He was a life-long resident of Racine. You could often catch Mike out on one of the local municipal golf courses or gathered with friends watching the Raiders at Horlick Field. He attended St. Catherine’s High School, graduating in 1967. Mike was in the National Guard, and a long-time member of the Johnson Park Golf Course. He was an avid sports fan, especially for the Packers, Bucks and Brewers. He was a football season ticket holder and cherished spending time with his family, cheering on the Packers from the north end-zone of Lambeau Field. Mike was also a drum and bugle corps enthusiast. He was a soloist for the Racine Scouts, Boys of ‘76 and the senior Racine Kilties. Well known and liked in the community, Mike was asked to and performed with the Royal Airs Alumni corps from Chicago, and the St. Kevin’s Emerald Knights alumni corps from Boston. He was widely known for his encyclopedic and immediate recall of drum corps trivia. He was employed by Jos Lawrence and Garbo Motors for many years, retiring in 2017. He was a career salesperson, well respected by management and customers for his knowledge, courtesy and professionalism. Mike will be deeply missed by his sons, Andy (Ginger Wilcox) Kaufman, and Christopher Kaufman; brother, Jim Kaufman; grandchildren, Micaela and Gavin; nieces, Rhyanna Kaufman and Sammi (Kyle) Marinac; great nieces, Lilie and Piper. He is further survived by other close relatives and a tremendous circle of friends. A memorial service and a celebration of Michael’s life will be held at a later date.

The family of Michael Louis Kaufman created this Life Tributes page to make it easy to share your memories.

Send flowers to the Kaufman family.