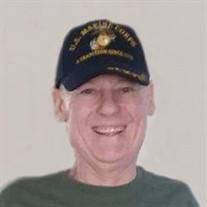 Michael Lee Sparks RACINE - Michael Lee Sparks, 63, passed away at his residence on Wednesday, August 5, 2020 surrounded by his family. He was born in Racine on June 24, 1957, the son of the late Harold and Ella (nee: Beckman) Sparks. Mike was a graduate of J.I. Case High School. In 1974, he proudly joined the United States Marine Corp, serving as Corporal until 1978. Mike was united in marriage to Kristi Young at Wustum Museum on August 3, 1985, recently celebrating their 35th anniversary. He worked for Derse Exhibits as a warehouse manager for 22 years. Mike was a member of Castle Rock Boat Club. He enjoyed going to the cabin up north, fishing, and hunting. He loved his cats, but most of all, loved spending time with his grandchildren and family. He will be missed by his wife, Kristi, daughter, Jessica (Matt) Kloskey, son, Timothy (Kristen) Sparks; grandchildren, Mason "Muscle Boy" and Nolan Kloskey, and Madelyn Sparks; siblings, Robert (Lynne) Sparks, Nancy Hendren, Susan (Charles) Kuiper, Sally Ackerman, Judy (Scott) Barrows, Marie (Lance) Buchta, and Wallace (Janie) Sparks, brother-in-law, James Pawlak and best friend, John Larson. He is further survived by nieces, nephews, other relatives and friends. Mike was preceded in death by his sister, Linda Pawlak. A memorial service will be held at Sturino Funeral Home on Saturday, August 8, 2020 at 12 p.m. with full Military Honors to follow. Visitation will take place at the funeral home from 10 a.m. until the time of service. Mike's service will be webcasted on the funeral home website, beginning at 12 Noon. In lieu of flowers, memorial donations to the family to be used toward Mike's favorite charities would be appreciated. Mike's family will forever be grateful to his sister Judy for giving him the gift of a longer life through her kidney donation. His family would also like to give a special thanks to the Northwestern Medical team for taking such great care of him.

Michael Lee Sparks RACINE - Michael Lee Sparks, 63, passed away at his residence on Wednesday, August 5, 2020 surrounded by his family. He was born in Racine on June 24, 1957, the son of the late Harold and Ella (nee: Beckman) Sparks. Mike was... View Obituary & Service Information

The family of Michael Lee Sparks created this Life Tributes page to make it easy to share your memories.

Send flowers to the Sparks family.