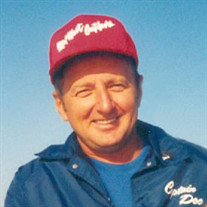 Monty "Doc" Matson RACINE - Monty "Doc" Matson, 75, passed away on Tuesday, June 12, 2018 at Froedtert Hospital with his family by his side. He was born in Racine on August 30, 1942, the son of the late Alvin and Lucille (nee: Deinken) Matson. Doc was a 1960 graduate of Wm Horlick High School. He proudly served his country in the United States Army from 1964 to 1966. On May 29, 1965, Doc was united in marriage to the former Sharon Stephan at Grace Lutheran Church. Following in the family footsteps Doc’s first business was Matson Service. In 1983, Doc found his true calling in life as a Captain on Lake Michigan as "Double D Charter Fishing, Inc.", was founded and he enjoyed until his passing. He was a longtime member of Salmon Unlimited. He was a NASCAR fan, and enjoyed playing pool. Above all, Doc loved spending time with his family and friends. Surviving are his wife, Sharon; sons, Matthew (Terri) Matson, and David (Debbie) Matson; grandchildren, Aymee, Madelynn, Nathan, David Jr., and Sydni; and great grandchildren, Laycee, Abigail, and Madison. He is further survived by other relatives and many dear friends, and the fishing community. Doc was preceded in death by his brother, Glen Matson, and aunts and uncles. Funeral service for Doc will be held at Sturino Funeral Home on Tuesday, June 19, 2018 at 2 p.m. Visitation will take place at the funeral home from 10 a.m. until the time of service. Doc will be laid to rest in a private ceremony. In lieu of flowers, those wishing to remember Doc in a special way may direct memorials to Wisconsin Lakeshore Business Association, PO Box 221, Algoma, WI 54201. Please include Doc Matson in the memo. Preserving our Lake Michigan fishing heritage for generations to come.

Monty "Doc" Matson RACINE - Monty "Doc" Matson, 75, passed away on Tuesday, June 12, 2018 at Froedtert Hospital with his family by his side. He was born in Racine on August 30, 1942, the son of the late Alvin and Lucille (nee: Deinken) Matson.... View Obituary & Service Information

The family of Monty "Doc" Matson created this Life Tributes page to make it easy to share your memories.

Send flowers to the Matson family.