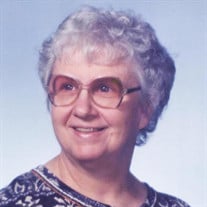 RACINE - Nancy L. (nee: Wilear) Fiebig, passed away peacefully on May 11, 2022. She was a lifelong resident of Racine, born on February 28, 1932. She was the daughter of the late Sidney and Evylyn (nee: Lettow Wilear). Nancy attended Wm.... View Obituary & Service Information

The family of Nancy L. Fiebig created this Life Tributes page to make it easy to share your memories.

Send flowers to the Fiebig family.