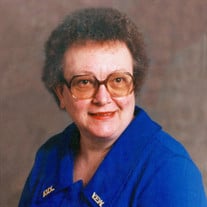 Nancy Ann (nee: Schmitt-Valle) Stevens, 87, passed away on August 18, 2019. She was born in Milwaukee on July 14, 1932. Nancy graduated from Mill Valley Grade School in Muskego, WI in 1945. She then attended Solomon Juneau High School in West Allis, graduating in 1949 at the age of 16. At the age of 18, Nancy joined the United States Air Force, serving stateside in 1950-1952, as secretary to the Commander of Maintenance, Supply and Motor Vehicle at Shaw Air Force Base in Sumter, SC. She married Roscoe “Rocky” Valle in 1951, and had her first son, Perry Lynn Valle in 1952. After a divorce in 1955, and moving back to Muskego, she worked at Time Products Co., Patrick Cudahy, and Sprinkman and Sons in Milwaukee. In 1960, Nancy married Everette "Chubby" Stevens, and had three more sons, Edward (1960), William (1961), and Patrick "PJ" (1966), and a daughter, Kathryn (1970). In 1978, she went back to work as an office manager at John Glasspiegel Co., then moved on to Associated Bag Company as an assistant to the Operations Manager. She then worked as Office Manager at Shelton Reynolds in Milwaukee. Nancy retired in 1994, and took part-time positions; including driving cars for Budget Rent-A-Car, Office Supervisor for the 2000 US Census Bureau in Racine, and Receptionist for Harbor Medical in Mount Pleasant. In 1962, she joined the Charles Fidler VFW Auxiliary #9469 as a Charter Member, and found her life's calling. When Nancy's family moved to South Milwaukee, she transferred to the Stewart Turczyn VFW Auxiliary #3742, and became a National Life Member #272. She served there as treasurer and historian for more than 50 years. Nancy also served as President during 1974 to 1976, and became the fourth District President in 1981 to 1982. During this time, she had worked with the VFW Auxiliary State Treasurer for eight years, and ran for the office of State President, serving that office in 1989 through 1990, her theme being "A Rainbow of Service". Following her term as president, she served the state as Audit Chairman for eight years. During this time, she became a nationwide traveler by attending National Conventions and Big 10 conferences. She also served as Big 10 Auxiliary Conference President in 2003 to 2004. Nancy then served as state historian for five years, and wrote a condensed version of the 80 year history of the state auxiliary. She also served as treasurer for the state 25 Year Club. Nancy was proud to say that she traveled (with her daughter, Kathy) to every state in the USA; including four times to Hawaii, a road trip west through Canada to Alaska, a road trip east through Canada to New Brunswick and Prince Edward Island. She also traveled with friends from the VFW Auxiliary to Mexico, Australia, Holland, Belgium, Germany, Austria, Italy, Switzerland, and France. Besides traveling, Nancy enjoyed photography, scrapbooking all of her trips, playing Mahjong on the computer, and Bingo. Surviving are her four sons and one daughter; daughters-in-law, LouAnn Valle, Barbara Stevens, and Sandra Stevens; grandchildren, Bradley Stevens, Brittni Stevens, and Dustin Orlinski; sisters, Betty Zellmer, Dorothy Schmitt, and Christine Alvarez; brothers, William (Marge) Schmitt, Tom (Dianna) Schmitt, Roger Schmitt, and Terry Schmitt. She is further survived by nieces, nephews, other relatives, and many friends of the VFW and Auxiliary family. Nancy was preceded in death by her parents, William and Evelyn Schmitt; husbands, Roscoe and Everette, and sister-in-law, Gayle Schmitt. Some of Nancy's last words were, "Rainbows always!!!”. Funeral services for Nancy will be held at Sturino Funeral Home on Friday, August 23, 2019 at 11:30 a.m. Visitation will take place at the funeral home from 9:30 a.m. until the time of service. Many heartfelt thanks to the care team at the Veterans Home in Union Grove, WI; especially Ashley, Renate, and Sue, along with the team at Burlington Hospital ICU ward, especially Liz.

Nancy Ann (nee: Schmitt-Valle) Stevens, 87, passed away on August 18, 2019. She was born in Milwaukee on July 14, 1932. Nancy graduated from Mill Valley Grade School in Muskego, WI in 1945. She then attended Solomon Juneau High School in West... View Obituary & Service Information

The family of Nancy Ann Stevens created this Life Tributes page to make it easy to share your memories.

Send flowers to the Stevens family.