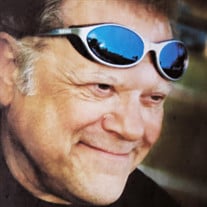 Nicholas Peter Baldukas RACINE - Nicholas 'Nick' P. Baldukas, 70, passed away peacefully on Saturday, January 12, 2019 surrounded by his loving family and friends. A lifelong resident of Racine, he was born on April 21, 1948, son of the late Peter Nicholas and Gladys (Kanyuh) Baldukas. Nicholas was a graduate of Wm. Horlick High School "Class of 1966." His working career was primarily at Twin Disc, where he ushered in Computer Numeric Control (CNC) manufacturing. During his 21 years there, he continued studying engineering, attending Bradley University, UW Parkside, Carthage and numerous workshops and seminars at major manufacturers around the US. He also worked at Styberg Engineering before switching careers to land development and general contracting. He designed and developed Mallard Shores on property he and his wife owned surrounding Halter Lake. Nick loved his new career and continued designing and building high end homes in southeastern Wisconsin, until illness required him to retire. In 1985 he married Dr. Ann-Mari (Ingebrigtsen), his soul mate and loving companion. Together they pursued their common love of tennis, hiking, skiing, travel and spending time at their lake home on Castle Rock Lake where he developed lasting friendships, especially with Dave and Karen Janssen. He loved taking off on road trips throughout the US and going to Norway to meet with Ann-Mari's family and friends. Nick loved speed, whether driving his corvettes on deserted country roads or speeding over Lake Gogebic on his snowmobile with Ann-Mari urging him to go faster. He shared his love of motorcycles taking grandson Morgan and son Peter on motorcycle trips, or exploring wide swaths of the US, riding next to his special friend, Gary Grissom. When it came to going fast, Nicholas was very competitive. A good example is his jet ski race with a friend on Castle Rock Lake, when lo and behold his friend out ran him. The very next day the garage was strewn with jet ski parts and Nicholas was hard at work engineering a faster ride. And he succeeded, leaving his friend in his wake during the next day's "friendly race." Nick's lifelong friend Dale Zierten, some years ago invited him to join a group of early school friends for coffee and discussions of the past. He loved meeting with his morning coffee buddies. Nicholas was an active hands on father/grandfather, who coached his sons softball team and attended multiple sports events to cheer on his children and grandchildren. These events included t-ball, soccer, swimming, tennis, track and basketball. His reputation for being able to fix anything, resulted in late night calls from the children's friends with car trouble on the interstate. He always came to their rescue. Nick was an active member of the Greek Orthodox Church, an altar boy as a child, working the annual festival and serving on the church council for many years, as the treasurer. He was a member of Twin Disc Twenty Year Club, Kiwanis, a two time past president and Lt. Governor, Sons of Norway, where he also was past president and member of District 5 Board of Trustees. His joviality, zest of life and desire to be of help to family and friends, were hallmarks of his personality. Nick had a true love for the outdoors and enjoyed hunting, hiking and swimming. He was a hard working, dedicated man, who always gave life his best. He had a love for the outdoors, his family, his pets and for life. Here was a person who probably wouldn't say "there was something I wish I had done." Nicholas and Ann-Mari enjoyed hosting parties on their beautiful covered porches, especially the annual Sons of Norway Picnic, the September Multiple Myeloma Support Group Picnic and as well as family cookouts, with swimming, fishing, horseshoes and trampoline. Nick is survived by his beloved wife of 33 years, Ann-Mari and their children, Dana Baldukas, Pamela (Andrew) Patch, Nicole (Jonathan) Eckblad and Shane (Victoria) Peirce; grandchildren, Dr. Thomas (Shvaughn) Paulick, Daniel (fiancé Alexis Jensen) Eckblad , Ariel Harrington, Amanda Eckblad, Petra Harrington, Cassidy (Scott Schindelar) Crowell, Morgan Patch, Megan Patch and Peter Eckblad; great grandchildren, Kenneth, Declan and Brynn Paulick, Chase and Brecklyn Peirce, Atlas and Isle Schindelar, and Rylee Lempke and Alexandra Eckblad; sisters, Vivian (Tony) Merlo, Sharon Baldukas and Demetra Baldukas; sister-in-law, Randi (Aage Breiby) Ingebrigtsen of Norway. He is further survived by a Goddaughter, Xanthi Merlo, a special nephew "son," Kristian (Lynn) Wergeland Digranes, who is a Park High School graduate and he also attended Gateway Technical College and UW Parkside before returning to Norway where Kristian is currently a canine police officer in Oslo. Nick is further survived by many nieces, nephews other relatives and many dear friends. Nick was preceded in death by his son, Peter Nicholas Baldukas on November 29, 2004. Funeral services will be held at Kimissis tis Theotokou, Greek Orthodox Church, 1335 S. Green Bay Road on Monday, January 21, 2019 at 10:30 a.m. with Rev. Fr. Athanasios Pieri officiating. There will be a visitation at Sturino Funeral Home on Sunday evening from 4:30 p.m. to 7 p.m. with Trisagian Prayers at 7 p.m. Nick will be laid to rest next to his son at Graceland Cemetery following services. In lieu of flowers or those wishing to remember Nick in a special way - donations to the following have been suggested: Kimissis tis Theotokou Church, Multiple Myeloma Research Foundation https://themmrf.org, National Kidney Foundation https://www.kidney.org/support & https://www.kidney.org/transplantation, Sons of Norway District Five www.sonsofnorwayracine.com/index.html, Contact Mike Palecek, 262-886-5547, Kiwanis Club of Racine https://www.facebook.com/Kiw anis-Club-of-Racine-170911539484 A special heartfelt thank you to Aurora St. Luke's Hospital and Aurora Zilber Family Hospice for their exceptional doctors and staff. Nick was blessed to be in their care. We're sure you all will remember Nick's famous optimistic words "I never had a bad day in my life."

Nicholas Peter Baldukas RACINE - Nicholas 'Nick' P. Baldukas, 70, passed away peacefully on Saturday, January 12, 2019 surrounded by his loving family and friends. A lifelong resident of Racine, he was born on April 21, 1948, son of the late... View Obituary & Service Information

The family of Nicholas Peter Baldukas created this Life Tributes page to make it easy to share your memories.

Send flowers to the Baldukas family.