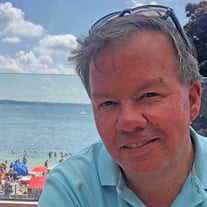 Oscar Valentin Perez-Hereira, 56, passed away at home on Monday, January 24, 2022. Oscar was born October 30, 1965 in Caracas, Venezuela to Oscar Perez-Gonzalez and Blanca Hereira. He received his Bachelor’s Degree from Universidad Santa Maria in 1989, and his Master’s Degree from Universidad Metropolitana in 1991. He was united in marriage to the love of his life, Lianna Carafa, on December 17, 1994 in Venezuela. Oscar worked as a financial manager at S.C. Johnson for 24 years. In his free time, he enjoyed reading anything about the economy or economics, and good food, good wine, and traveling. Above all, Oscar loved being a dad, and spending time with his family. He was the compass for his family, and was the happiest man in the world when he was with his wife and his sons. Oscar will be deeply missed by his wife, Lianna; his sons, Juan Andres and Gabriel; mother, Blanca; sister, Andreina; brothers, Northan and Roland; and other family members and friends in Venezuela. He will be reunited with his dad, Oscar; and his grandmother, Avelina. In lieu of flowers, memorials may be made to St. Jude’s Children Research Hospital. The family would like to extend a special and heartfelt thanks to Ada, Ruben, Eleo, Mark, and Bella, for being their support and company in such a difficult time.

The family of Oscar Valentin Perez-Hereira created this Life Tributes page to make it easy to share your memories.

Oscar Valentin Perez-Hereira, 56, passed away at home on Monday,...

Send flowers to the Perez-Hereira family.