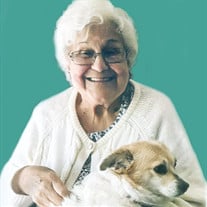 Patricia Louise (nee: Ruetz) Brown, 83, passed away at her residence, on Tuesday, August 27, 2019. She was born in Racine on October 27. 1935, the daughter of the late Jerome and Mary (nee: Kokke) Ruetz. Patricia was a 1953 graduate of St. Francis de Sales High School. On September 18, 1954, she was united in marriage to Sylvester Brown in Inglewood, CO. They met at a roller rink and were together for over 50 years. Patricia worked as an Educational Assistant for Racine Unified School District, retiring in 1990 after 23 years of service. She and Sylvester also owned Broken Hand, Inc - Colonial Merchants, which took them around the country. Patricia was an accomplished seamstress, creating authentic period clothing for their trade business. They lived in Monterey, Tennessee after retirement. Patricia was a former member of West Allis Bowman, and black powder shooting clubs. She loved her dog, Morgan, who was her loyal companion for more than ten years. Surviving are her children: Mary Lou (James) Nielsen of Mt. Pleasant, Russell (Robin) Brown of Jamestown, TN, Allen (Stacey) Brown of Litchfield Park, AZ, and Mark (Vickie) Brown of East Greenwich, RI, ten grandchildren, 23 great grandchildren, and one great great grandson. She is further survived by a brother, Robert (Mary) Ruetz of Cumberland, WI, other relatives and friends, and her best friend Morgan. Patricia was preceded in death by her husband, Sylvester Brown on June 3, 2005, grandson; sisters, Mary Peasley, and Dolores Christie, and brothers, Ralph Ruetz, and Jerome Ruetz Jr. Patricia’s memorial service will be held at Sturino Funeral Home on Sunday September 15, 2019 at 2:30 p.m. Visitation from 1 p.m. until service time at 2:30 p.m. Those wishing to remember Patricia in a special way may direct memorial donations to Best Friends Animal Rescue in Jamestown, TN. Memorial Service will be held at Sturino Funeral Home on September 15, 2019 at 2:30 p.m. with Rev. Allison Johnson officiating. Visitation will take place from 1 p.m. until service time. Patricia's family would like to express heartfelt appreciation to Killarney Kourt and Aurora at Home hospice for all of their compassionate and loving care of our mom.

The family of Patricia Louise Brown created this Life Tributes page to make it easy to share your memories.

Patricia Louise (nee: Ruetz) Brown, 83, passed away at her residence,...