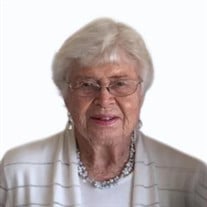 Patricia Jean (nee Smith) Terry, 92, passed away on April 21, 2021. She was born on July 2, 1928, the daughter of Robert and Nellie (nee Dunham) Smith. As a child, she was fortunate to have Petrifying Springs as her back yard playground. At the age of 14, while at the local grocery store, a handsome, red-haired lad offered her an ice cream cone, and so began a love affair with her husband of 73 years. Pat married her sweetheart, George Terry, on September 27, 1947, and together they raised five red-haired children. Pat’s passions in life were her family, gardening and knitting, with family being her highest priority. She was an immaculate housekeeper and her meals and desserts were made entirely from scratch. George would often request her delicious pies, often just after finishing the last piece of the pie she just made! Her large flower gardens were amazing! People were known to stop and take pictures as they were driving by. Her knitted afghans and teddy bears are cherished by her entire family. She was always fashionably dressed wherever she went. Pat and George enjoyed traveling and took trips to Florida, Hawaii, the Bahamas, the East Coast, Alaska and Canada. After retirement, they spent their winters in Arizona. Pat was a past member of St. Sebastian’s Church, Our Lady of the Lake Church in Lake Havasu City, AZ, more recently St. Paul the Apostle Parish. She is survived by her children, Linda (Jerry) Auger, Sandra (Keith) Radke, Catherine Fisher; grandchildren, Rebecca (Jon Robbins) Mulder, Kim (Bryan) Zamora, Laura (Jennifer) Abrams, Jordan Bishop; great-grandchildren, Brittany (Kyle) Lucier, Dakota Winiger, Shane (Jordan) St. Pierre, Rhiannon Mulder; great-great-grandchildren, Adelynn, Lacey, Kellen and Warren. She is further survived by her brother, Kenneth (Mary) Smith; nieces, nephews, other relatives and friends. Pat was preceded in death by her husband, George, just four months ago on December 3, 2020; sons, Richard and Robert; great-grandson, William Mulder; brother, Robert Smith; sons-in-law, Dennis Jensen and Jack Fisher. Mass of Christian Burial will be held at St. Paul the Apostle Parish on Tuesday, April 27, 2021 at 11:00 a.m. Visitation from 10:00 a.m. until time of service. Pat will be laid to rest at West Lawn Memorial Park with her husband and sons. We know that George and Pat are enjoying those ice cream cones together once again. In lieu of flowers, memorials to the Alzheimer’s Association or a charity of your choice have been suggested. A special thank you to her angels at Parkview Gardens and Hospice Alliance for their exceptional compassion and caregiving.

Patricia Jean (nee Smith) Terry, 92, passed away on April 21, 2021. She was born on July 2, 1928, the daughter of Robert and Nellie (nee Dunham) Smith. As a child, she was fortunate to have Petrifying Springs as her back yard playground.... View Obituary & Service Information

The family of Patricia Jean Terry created this Life Tributes page to make it easy to share your memories.

Send flowers to the Terry family.