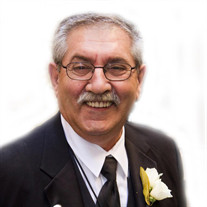 Patrick “Pat” Sarto (May 11, 1939 – April 30, 2020) Age 80 Patrick David Sarto (Pat), beloved husband, father, and grandfather, was born to Dominick and Rose (Savasta) Sarto on May 11, 1939 in Racine, one of ten brothers and sisters. He attended St. Patrick’s school, Washington Jr. High and Horlick High Schools before joining the U.S. Army in 1957, where he served in Germany. He loved the members of his big family, and the wonderful memories they made. He married Sandra Radewan (Justine) and they welcomed son Perry Sarto in 1961. For some time, they lived in Green Bay, where he worked as an inspector with the railroads. In 1975, Pat married the love of his life, Denise Anastasio, and they were looking forward to celebrating 45 years of marriage this July. Together they had a son Angelo Anastasio Sarto and daughter Nicola Anastasio Sarto. Shortly after their wedding, they purchased a home on Blake Avenue, where they met dear neighbors who became lifelong friends. Living so near to The Sausage Kitchen was also special for Pat. It became his second home, and the other regulars became his second family. Pat continued to go there long after they moved from Blake Avenue, and up until the time of the stay-at-home orders. Pat was an outgoing man and had the ability to remember people and places he met long before. He never lost his sense of humor, even when times were difficult. Pat worked at several places, but his favorite jobs were in outside sales, where he could be out on his own and engage with people, especially when he worked for Edison Liquor and Go Recycling. His last job, which he continued into retirement, was at the Radisson Harborwalk. People loved Pat, especially children, for whom he had a special affinity. A child at heart, he recently built a model train layout and spent happy hours going to hobby shops looking for new additions. He was also known as “sneaky” Papa, managing to sneak treats to his grandchildren unbeknownst to their parents. Pat loved his family and was so proud of their every accomplishment that he bored friends and strangers alike bragging about them. When younger, Pat enjoyed playing golf and cribbage with his brothers and friends (He continued to play the latter despite one time throwing a cribbage board into the fireplace after too many losses!) Never having had vacations as a child, he relished the trips he and Denise were able to make to Hawaii, Italy and Alaska – and more recent trips with friends and relatives where they explored the United States. A highlight was last year’s trip to Disney World with the youngest grandchildren. Vacations with the Panyks and road trips with brother Dick and his wife Lorna are also cherished memories. Pat was challenged by medical issues during his lifetime, especially trigeminal neuralgia, which changed his life in many ways, resulting in surgeries and medications that permanently affected him physically, though he always maintained his sharp wit. Pat would always bounce back from his surgeries, earning him the nickname of the Energizer Bunny. Sadly, on April 29th, he suffered a massive stroke from which he could not bounce back. Pat was preceded in death by his parents and by siblings Elizabeth, Robert, Sally, Roger, Robertine (Boots), Arthur, Ursula and Mary Ellen and by his sister-in-law and brother-in-law, Cheryl and Dennis O’Brien. He is survived by his loving wife, Denise Anastasio, and children Perry Sarto of Green Bay, Angelo (Erinn Hylton) Sarto of Franksville and Nicola (Esteban) Malacara of Mt. Pleasant. In addition, he is survived by grandchildren Faleon Sarto, Mickey (Jake) Burg, Dominick Sarto, River Sarto, Savio Malacara and Solana Malacara and one great-grandchild, Lochlan Burg. In addition, he will be mourned by his brother and dear friend Richard “Dick” (Lorna) Sarto, and his in-laws Lance (Sherry) Anastasio, Cary (Pat) Anastasio, and Julie (Walter Graffin) Anastasio. Pat had many nieces and nephews who loved their “favorite uncle” (the title in some dispute!). They will miss him deeply and laugh when they think of their memories of him. He is also survived by cousins and many other friends and family. The family would like to thank the staff at Ascension All Saints who provided compassionate and professional care in his last illness - and his long-time cardiologist Dr. Prakesh Shah and primary doctor Dr. Niraj Shah who always treated him with great care and helped him live a full life to the end. Remember Pat and smile when you think of him – he led a full and authentic life. Should you wish to honor Pat with a donation, we suggest The Facial Pain Association at https://fpa-support.org/ or your favorite charity. Due to Covid-19 restrictions; Pat's memorial visitation and services will be announced and published on the funeral home website and Racine Journal Times when restrictions have been lifted.

The family of Patrick "Pat" David Sarto created this Life Tributes page to make it easy to share your memories.

Send flowers to the Sarto family.