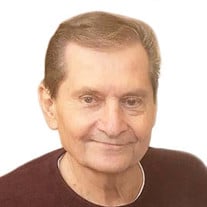 Peter Mayer, 72, resident of Racine, passed away on Tuesday January 4, 2022. He was born in Racine on May 31, 1949, son of Peter and Helen (Chvilicek) Mayer. Peter was a lifelong resident of Racine growing up on Goleys Lane with his 11 siblings. In March of 1969 Peter was drafted by the United States Army to serve in the Vietnam War which he did so until his honorable discharge in October of 1970. Despite the fact that the war left him with scars not visible to the naked eye, he was still proud of his service and the awards and medals he earned during his time overseas. When Peter returned home, he did his best to adjust to civilian life. On October 29, 1971, he was united in marriage to the love of his life, Deborah M. Mayer (nee: Melnik). After 33 years of marriage his beloved wife fell ill with Lou Gehrig's disease. Although this was devastating news, Peter and Deborah faced the diagnosis head-on. They chose to keep her comfortable at home where they both wanted her to be. This meant that overnight Peter became her nurse, caretaker, tooth-brusher, back scratcher, cook and comedian until she passed peacefully on October 20, 2005. Peter was not a man of many words, but he had a very generous heart. He loved his grandchildren dearly and, in the years following his wife's passing, he filled his time taking them to and from school and watching them when needed. He also enjoyed gardening and feeding the wildlife that ventured into his backyard. In the last several months of his life, Peter became a resident at The Pillars at Crystal Bay Assisted Living Apartments. It took some adjusting on his part but in the short time that he was there he built friendships and bonds with the staff and residents that meant a lot to him. Surviving are his children, Peter J.(Sherry) Mayer, III and Angela L. (Joe) Mayer. Siblings; Katie (Dennis) Hoffman, Mike (Nancy), Susan Roushia, Lorraine (Lynn) Daniels, Loretta(Sam) Ferraro, Patti (Tony) Zbichorski, Tom, Joe (Pam), Steve (Shelley), Robert (Loretta), Chris (wife of late William Mayer). He is further survived by many nieces, nephews, other relatives and friends. Peter was preceded in death by his father, Peter L. Mayer, Sr.; his wife, Deborah M. Mayer (nee: Melnik); his mother, Helen M. Mayer (Chvilicek); his brother, William Mayer and his nephew, Steven Ferraro. Visitation will be held at Sturino Funeral Home on Tuesday, January 11, 2022, from 3:30 p.m. until 5 p.m. with full military honors to follow. Peter will be laid to rest in a private ceremony at Southern Wisconsin Veterans Memorial Cemetery.

Peter Mayer, 72, resident of Racine, passed away on Tuesday January 4, 2022. He was born in Racine on May 31, 1949, son of Peter and Helen (Chvilicek) Mayer. Peter was a lifelong resident of Racine growing up on Goleys Lane with his 11 siblings.... View Obituary & Service Information

The family of Peter Mayer created this Life Tributes page to make it easy to share your memories.

Peter Mayer, 72, resident of Racine, passed away on Tuesday January...