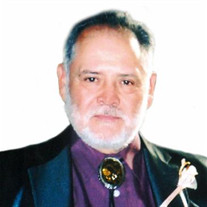 Refugio Heredia RACINE - Refugio Heredia, age 70, passed away at Ascension All Saints Hospital on Friday, September 28, 2018. Refugio was born in Mexico on September 8, 1948 the son of the late Teodoro and Dolores (nee: Paniagua) Heredia. On June 22, 1968 he was united in marriage to Rosalinda Lopez. They had just celebrated 50 years of marriage. Refugio was a member of Saint Richard of Chichester Church. Refugio enjoyed spending time with his family and especially his grandchildren. He had a few special friends that he enjoyed spending time with also. Refugio had a passion for classic cars. He worked at Walker Forge for many years. As of late, he did landscaping. Survivors include his wife, Rosalinda (nee: Lopez); his children, Dolores (Rafael Gonzalez), Rosendo, Salvador, Teodora (Darryl) Nunn, and Samarra all of Racine; his grandchildren, Alexis (Darvis Lockridge) Flores and Lorena (Anterio Stokes) Flores, Jose Rosendo, Amanda, Rylin, and Kailyhn Heredia, Angell Heredia and Sadie Hoeppner, Mo’Ani Walton, A'doria and Darryl Jr. Nunn; great-grandchildren, Peyton, Aaron, and Jordyn Lockridge, Mila and Amar'e Stokes and Leila Heredia. Refugio is survived by three brothers, Jose of California, Serafin and Guadalupe of Illinois and three sisters, Reyna of Mexico, Rosa Elia of Florida, and Maria Socorro of Illinois; and many nephews, nieces, other relatives and friends. He was preceded in death by his father, Teodoro Heredia; his mother, Dolores Heredia; and his sister, Magdalena Heredia. Mass of Christian Burial will held at St. Richard of Chichester Catholic Church, 1509 Grand Ave. Monday, October 8, 2018 at 11 a.m. with Rev. Jerry Hessel officiating. Following mass Refugio will be laid to rest at Holy Cross Cemetery Highway 32. Visitation will be held at Sturino Funeral Home on Sunday October 7, 2018 from 3 pm to 6 pm and at church on Monday from 10 am until mass time at 11am. Refugio’s family would like to extend a very special thank you to the entire staff at Ascension All Saints I.C.U. for their excellent care and compassion given to the Heredia family.

Refugio Heredia RACINE - Refugio Heredia, age 70, passed away at Ascension All Saints Hospital on Friday, September 28, 2018. Refugio was born in Mexico on September 8, 1948 the son of the late Teodoro and Dolores (nee: Paniagua) Heredia. On... View Obituary & Service Information

The family of Refugio Heredia created this Life Tributes page to make it easy to share your memories.

Send flowers to the Heredia family.