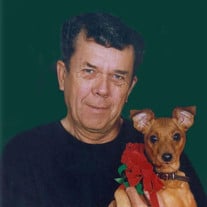 FRANKSVILLE - Richard Earl Babe, Jr. passed away on November 20, 2019. He was born in Racine on February 18, 1934 to the late Richard Earl Babe, Sr. and Margaret (nee: Jung) Babe. Richard joined the United States Army for two years. On December 2, 1961, Richard was united in marriage to Joyce Krizan. He worked for Zigenago Construction, and Danbar Construction, retiring in 1989. After his "retirement" he worked part-time at Metro Auto Auction. Richard is survived by his beloved wife, Joyce, brother, Bill (Jean) Babe, sister-in-law, Vivian (Marvin) Steffen; and brothers-in-law, Richard LeMay, Ron (Sue) Krizan, and Lorin Barth. He is further survived by many other nieces, nephews, family, and dear friends. Richard was preceded in death by his parents, brother, Robert; sisters, Carol and Betty, sister-in-law, Joann; brothers-in-law, John Krizan Jr., and Russel Krizan, Father and mother-in-law, John (Irene) Krizan Sr., and his niece, Babette Olson. Special thank you to the staff at Ascension All Saints in Racine, and friends who have been so caring and helpful during his Illness. Richard loved being at home, watching sports with his beloved dog, Fawn, gambling with the old codgers, and going to local pubs. In keeping with Richard's wishes, a private service has already taken place, with interment at West Lawn Memorial Park. Donations may be made to one's favorite charity.

The family of Richard Earl Babe Jr created this Life Tributes page to make it easy to share your memories.

Send flowers to the Babe family.