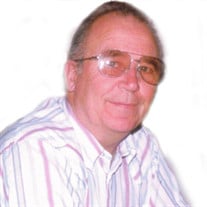 Richard H. Binder, Sr MT. PLEASANT- Richard “Dick” H. Binder, Sr, 80, passed away on Thursday, April 16, 2020 surrounded by his family. Dick was born in Racine on September 8, 1939 to the late Henry and Dorothy (nee: Henschen) Binder. He was united in marriage to Beverly Barbour in Boston, MA on January 30, 1959. Dick served in the United States Navy from 1956 to 1962 aboard the USS Keppler (DD-765). After being honorably discharged, he became a truck driver, a career he kept until retirement. Dick enjoyed: 50’s music, golfing, boating, camping, fishing and traveling. He was one who was always there to help anyone in need. Dick was a devoted husband to Beverly for over 61 years, loving father to Richard Binder, Jr and Sheri (Kyle Kimberlain) Pauls, most loving grandfather to 10 grandchildren, 12 great grandchildren and 2 great great grandchildren. Preceded in death by his son, John H. Binder, Sr, great granddaughter, Reese Heim and his brother, Robert Binder. Holding you forever in our hearts and memories, we love you Hinder, Dad, Grandpa and Friend.

The family of Richard "Dick" H. Binder Sr. created this Life Tributes page to make it easy to share your memories.

Send flowers to the Binder family.