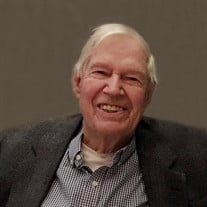 Richard “Dick” Joseph Ganzel, age 92, passed away unexpectedly on Monday, August 3, 2020 at Ascension Hospital. Dick was born on July 28, 1928 in Racine to Keith and Gladys Ganzel. He graduated from Park High School in 1946 and from the Milwaukee School of Engineering. Dick and the former Nancy Hance were married on March 14, 1959 in Milwaukee. They were devoted to each other for over 60 years. Dick was a sergeant in the U.S. Army, serving as a radio operator in Germany. He was an electrical engineer with Hamilton Beach Co. and Dremel Mfg. In 1977 Dick purchased Meyers Racine Monument Works, retiring in 1997 when his daughter and son-in-law took over the business. He and his wife also owned and operated Commitments Christian Bookstore for 30 years. Next to his wife and family, his greatest love was flying. He earned his pilot's license in the early 1950s and went on to become accredited in twin engine, IFR and commercial flying. In fact, Dick and Nancy's first date was a ride in his Cessna. It was her first airplane ride and she helped push the plane out of the hanger! Through the years, they accumulated many flying stories Dick was an excellent sportsman and through the years enjoyed boating, tennis, skiing, fishing and golfing. He also liked shooting pool and played a mean game of cribbage. Dick was a deeply committed Christian man and looked forward to the day when he would get to meet Jesus, face to face. We are rejoicing that he is doing that right now! Dick will be missed and irreplaceable as a husband, dad, grandpa and great-grandpa. In addition to his wife, Nancy, he leaves behind his children, Sarah Anspaugh, her husband, James Anspaugh and son Timothy. Also surviving him are his brother, William Ganzel, five grandchildren, 12 great-grandchildren and one faithful dog, Jessie. He was preceded in death by his parents, his sister, Virginia Medendorp and a stillborn granddaughter, Alyssa. Funeral service will be on Friday, August 7, 2020 at 11 a.m. at Grace Church, 3626 Highway 31. Visitation will be from 10 a.m. until service time at 11:00 a.m. with burial following at Graceland Cemetery. Memorials are suggested to: Voice of the Martyrs or Careers Industries.

The family of Richard Joseph Ganzel created this Life Tributes page to make it easy to share your memories.

Send flowers to the Ganzel family.