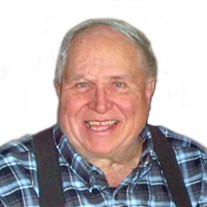 Richard Henry Hammann "The Million Mile Man" RACINE - Early on Christmas morning of 2019, Richard went to meet his daughter, Karen Christine. The two of them continued to Heaven to celebrate the Holidays with all the rest of his previously departed... View Obituary & Service Information

The family of Richard "Dick" Hammann created this Life Tributes page to make it easy to share your memories.

Send flowers to the Hammann family.