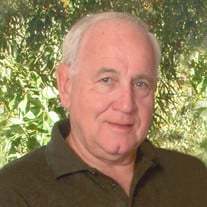 Richard C. Nelsen Jr. FRANKSVILLE-Richard Carl Nelsen Jr., 79, passed away peacefully at his residence on January 15, 2019 from complications due to M.S.A. He was born in Racine on February 15, 1939, the son of the late Richard and Margaret (nee: Jacobsen) Nelsen. Richard was a graduate of Wm. Horlick High School "Class of 1957." On August 15, 1959 Richard was united in marriage to Janice L. Clauer at St. Louis Catholic Church in Caledonia. His love of cars began at an early age, working as a mechanic at Freudenwald Olds in Husher for twenty years. His remaining years were with Snap-on Tools as an engineer, where he holds two US Patents, retiring in 2000. Richard was a longtime member of Toastmasters, served as both chairman and board member of Caledonia Park and Recreation Commission for 21 years. His various hobbies included attending car shows with his Excalibur, flying remote controlled planes, wood working and pride for his yard. Richard is survived by his children, Kurt of Raymond, Chris (Lorena) of Sturtevant, Kathy (Dennis) Brown of Greenfield and Dan (Jodi) of Franksville; nine grandchildren and six great grandchildren. He is further survived by nieces, nephews, other relatives and many dear friends. Richard was preceded in death by his wife, Janice on October 7, 2009. Mass of Christian Burial will be celebrated at St. Louis Catholic Church, 13207 Hwy G, on Saturday, January 19, 2019 at 11:30 a.m. with Rev. Yamid Blanco officiating. Visitation will also be at church on Saturday before services from 9:30 to 11:30. Richard will be laid to rest at Caledonia Memorial Park Cemetery.

The family of Richard Carl Nelsen Jr. created this Life Tributes page to make it easy to share your memories.

Send flowers to the Nelsen family.