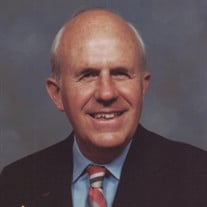 Richard W. “Dick” Nelson of Racine died peacefully in his sleep on Wednesday, March 11 at The Villa at Lincoln Park, where he’d been a guest for just 24 hours. Dick was born in Racine on July 16, 1925. He graduated from Washington Park High School in January of 1943, and from the University of Wisconsin-Madison in 1948. Having been rejected as 4F by the US Army, he was determined to play a part in the war effort. During World War II Dick was an ambulance driver in 1944-45 with the American Field Service (AFS) following Montgomery’s 8th Army through Italy, rescuing and driving to safety the front line wounded and dead of the Commonwealth’s forces through some of the toughest and bloodiest battles on the continent. For the rest of his life, he often thought of the wounded he carried in his ambulance. Dick was present at the final battle of Cassino which began at 11PM on May 11, 1944. It was one of the biggest artillery events in history, with as many as 1500 pieces of ordnance in use at the same time. His monthly pay was $20 during his AFS service. Ironically, as a war veteran and returning to Racine in 1945, the Army attempted to draft him again, but he was again rejected as 4F. In 1990 all AFS drivers were recognized and decorated by the US government as full-fledged participants in the European theater of war. It is interesting to note the AFS after WWII emerged into AFS International Programs, a scholarship program for high school students studying abroad. Many Racine students and families have participated over the years in AFS exchange programs. Following his AFS service and pursuing his degree in Madison, Dick was employed by John Oster Mfg. Co. of Racine from 1948-1967 marketing Oster products throughout Mexico and Latin America. He was very fluent in Spanish and Italian and spoke and wrote both until his death. From 1967-1985 Dick was Export Manager for Jacobsen Mfg. of Racine where he traveled throughout the world selling to and cultivating clients of Jacobsen’s superior line of gang mowers, used everywhere on golf courses, polo fields and government owned lands. Under his leadership, Jacobsen earned the US Commerce Department’s prestigious ‘E’ pennant for excellence in exporting American made products overseas. Dick enjoyed reading and playing the piano. In 1976 he resumed piano studies with Grant Malme of Racine for 30 years, with emphasis on opera and classical music of all sorts. Dick was a lifelong member of the First Baptist Church of Racine. He was preceded in death by his mother Rosetta Richter Nelson, father Louis James Nelson, brother Louis James Nelson Jr. (Frances Schulz), and is survived by nieces and nephews Louis James Nelson III (Suzanne Wieland), Susan Mann (Richard), Betsy Slade (Gary) and Nancy Osborne (Jeffrey) and many great nieces and nephews and extended family members across the continent. Memorial service will be held at First Baptist Church, 3117 Lathrop Ave, on Friday, August 6, 2021 at 11 a.m. There will be a visitation at the church from 10 a.m. until time of service. Dick has been laid to rest at Graceland Cemetery.

The family of Richard W. "Dick" Nelson created this Life Tributes page to make it easy to share your memories.

Send flowers to the Nelson family.