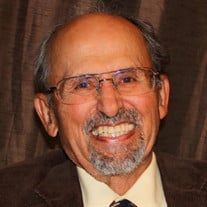 Richard “Rich” Eugene Pezanoski, age 91, was born October 6, 1930, in Milwaukee, Wisconsin to the late Sigmund Stanislous and Jane Anastasia (Lewandowski) Pezanoski. He passed away on March 29, 2022, surrounded by his loving family. Richard graduated from St. Catherine’s High School, Class of 1948. He fulfilled his childhood dream of flying and received his pilot license in 1951. He joined the Air National Guard, and then active military service as a radar operator in the Air Force from 1951-1953. Returning to Racine, he met and was united in marriage to Rachel Braford in 1955. Richard and Rachel raised nine children and also shared their home with foster children throughout the years. Richard was employed by the Racine Journal Times, starting part-time in 1947, and then working full-time from 1949 until he retired in 1990 with 41 years of service. Richard was a beloved son, brother, father, and friend. He was a true renaissance man, who greeted each day by counting his blessings: his family, the rising and setting of the sun, the feeling of the breeze off Lake Michigan, and the emergence of new growth in his garden. Richard was a working man with the spirit of an adventurer. He was a sailor, pilot, artist, storyteller, gardener, wine maker, wood carver, world traveler, lover of nature, and caregiver to his cat, Meow Meow. He was a man who lived his life through his hands, always creating, repairing, sharing, and reaching out to others. Richard was the unequivocal example of seizing the day to learn something new, talk to someone yet to know, and explore somewhere yet to be discovered. He was kind, charitable, steadfast in his beliefs, and a man who, above all, treasured the moments he was surrounded by his family. Through his last decade, he often spoke with exuberance about his full life and how he had been blessed with “bonus years.” As he closed his life, Richard was embraced by his family, who will forever feel his generous soul, encouraging eyes, and his lessons to welcome the awe of each breaking day. In addition to his parents, Richard was preceded in death by his brother, Raymond Pezanoski; sister, Mary Elaine Dretzka, brother-in-law, Roland Dretzka, son-in-law, Andy Cohen and sister-in-law, Lorraine Pezanoski. He is survived by his brother, Dr. Edward Pezanoski (Joanne); son, Mitchell Pezanoski, (Kim Lamar Pezanoski); 8 daughters, Diane Pezanoski (Andy Cohen, dec.), Joan Pezanoski (Michelle McKeown), Sue Pezanoski Browne, Leanne Evans (John), Carol Knitter (Jeff), Mary Bailey (Marty), Geralyn Pezanoski (Peter Markatos), and Lina Pezanoski; 18 grandchildren, Mitchell Pezanoski, Jr. (Kate), Matthew Pezanoski, Rachel Eberle (Dave), Alex Pezanoski, Anna Pezanoski-Cohen, Gabriel Pezanoski-Cohen, Alley Pezanoski-Browne (Nick Barbery), Peter Browne (Kaisa), Jake Evans (Kayla), Ian Evans (Andrea), Anna Evans, Christopher Knitter, Alexandra Knitter, Jordan McLean (Daniel), Landon Bailey (Emily), Jackson Pezanoski Markatos, Javasi Pezanoski-Young, Kenyatta Pezanoski-Young; 12 great grandchildren, Amos, Alexis, Alivia, Henry, Ben, Isaha, Sam, Charlie, Owen, Sunny, A.J., and Liam; loving companion of 30 years, Dorothy Spike; dear former spouse and good friend, Rachel Pezanoski; and cousins, nieces, nephews, and friends. A celebration of Richard’s life will be held at Sturino Funeral Home, 3014 Northwestern Avenue, Racine. Visitation will take place on Thursday, April 7, 2022, from 5 p.m.-7 p.m. A second visitation will be held on Friday, April 8, 2022, at 9:30 a.m., with a service at 10:30 a.m. Interment will follow with full military honors at Holy Cross Cemetery, 5600 Holy Cross Road, Racine. The family extends their deepest gratitude for the loving care, skill, and friendship that was provided to Richard by his St. Monica’s assisted living community over the past two years. In lieu of flowers, Richard’s family would like to honor the St. Monica’s community by suggesting memorials be sent to St. Monica’s Senior Living, 3920 N. Green Bay Road, Racine, WI 53404.

The family of Richard "Rich" Pezanoski created this Life Tributes page to make it easy to share your memories.

Send flowers to the Pezanoski family.