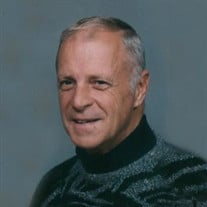 RACINE - Richard “Rich” John BeBow, 88, passed away on Wednesday, November 6, 2019 at his residence. He was born in Racine on January 21, 1931, the son of the late Paul and Marcella (nee: Kleinschmidt) BeBow. Rich was a “1950” graduate of St. Catherine's High School. He proudly served his country in the United States Navy, serving in the Korean War. On May 22, 1954, Rich was united in marriage for 65 years to Junne Neitzel. He worked for the City of Racine as a supervisor for the Department of Public Works. Rich was a longtime member of St. Joseph’s Catholic Church. Surviving are his wife, Junne; children, Cynthia (Patrick) McCray, Christine BeBow, Michael BeBow, Patrick BeBow, Peter (Cherie) BeBow, and Jeffrey (Jennifer) BeBow, 11 grandchildren, and sister-in-law, Eileen Adams. He is further survived by nieces, nephews, other relatives, friends and his faithful feline Sammi. Rich was preceded in death by his infant son, Thomas, brother, Paul Neil BeBow, and brother-in-law, Robert Adams. In keeping with Rich's wishes, private services have been held. He was laid to rest at Holy Cross Catholic Cemetery.

The family of Richard "Rich" John BeBow created this Life Tributes page to make it easy to share your memories.

Send flowers to the BeBow family.