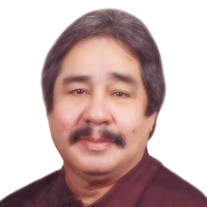 Richard Allen "Rick" Chingway, 65, passed away on June 17, 2022, at Seasons Hospice/Accentcare in Oak Creek. Rick was born March 1, 1957 to Ira John and Arlene Elizabeth (nee: Webster) Chingway in Watertown. After high school, he served in the United States Army. On October 20, 2007, Rick was united in marriage to the love of his life, Jodi Zamecnik. He was a member of the Congregation of the Great Spirit, and American Legion Post 0025 in Odanah. Rick was an avid outdoorsman, and enjoyed deer hunting, fishing, camping, and playing military video games. He will be deeply missed by his wife, Jodi; daughter, Cheyenne; mom, Arlene Burton; siblings, Irene Zipter, Mike (Judy) Chingway, Sheryl Uthemann, and John (Jana) Chingway; and many other nieces, nephews, family members, and friends. Rick goes on to be reunited with his dad, Ira Chingway; stepdad, Warren Burton; brother, Thomas Chingway; and aunts, Adeline Powless and Teresa (Coco) Riedl. Memorial service for Rick will be held at Sturino Funeral Home on Wednesday, June 29, 2022 at 6:00 p.m. Visitation will be held from 4:30 p.m. until time of service. Rick will be laid to rest in a private ceremony. The family would like to thank Columbia St. Mary's, Seasons Hospice/Accentcare, and Devita Dialysis, Racine.

The family of Richard "Rick" Allen Chingway created this Life Tributes page to make it easy to share your memories.