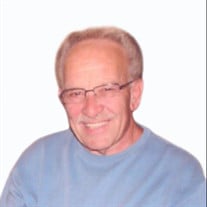 Robert Anthony “Bobby” DiPasquale, 75, a resident of Racine, passed away on Thursday, April 22, 2021 at home. Bobby was born on October 15, 1945 to Antony and Esther (nee: Falbo) DiPasquale. He was united in marriage to the love of his life, Lorraine Briggs, on February 4, 1967 at Saint Edwards Church. Bobby was a member of both Roma Lodge and Saint Lucy's Catholic Church. He was employed with J.I. Case Company retiring as a supervisor after 34 years of service. Ever the outdoorsman, Bobby found great enjoyment in time spent outside - whether he was hunting, fishing, or simply relaxing up north. He was always social and outgoing, and those who had the privilege of meeting him will always remember his larger-than-life personality. Bobby will be missed by his wife, Lorraine; children, Brian (Lisa) DiPasquale and Dawn (Jeff) Little; grandchildren, Toni Lynn Witkofski, Kristina DiPasquale, Brandon, Nathan, and Ashley Vankoningsveld; four great grandchildren, special cousins Bye and Rose Zickus, and other family members and friends. He will be reunited with his parents, Tony and Esther DiPasquale; grandson, Michael Witkofski; brother Nunzio and his wife, Betty; mother-in-law, Nelly Crass; and step-father-in-law, Kermit Crass. Mass of Christian Burial will be held at St. Lucy’s Catholic Church on Tuesday April 27, 2021 at 12 noon with Rev. Mark Jones officiating. Visitation will be at church from 10 a.m. until mass time. Following mass, Bobby will be laid to rest at Holy Cross Cemetery Hwy. #32.

The family of Robert "Bobby" DiPasquale created this Life Tributes page to make it easy to share your memories.

Send flowers to the DiPasquale family.