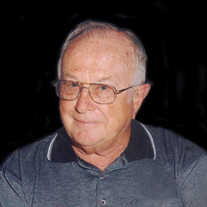 Robert Lee “Hoot” Hooten, 84, passed away at his home on Friday, August 17, 2018. He was born in Oconto, WI on March 30, 1934 the son of the late Peter and Gunda (nee: Olson) Hooten. He was a graduate Oconto High School. On June 4, 1955, Hoot was united in marriage to the former Audrey Bloom at Brookside, WI. He was employed at Twin Disc as a machinist retiring after many years of service. Hoot was a longtime member of Wisconsin Sportsman’s Club, Eskimo Snowmobile Club, and The Twin Disc 20 Year Club. He found great enjoyment in trap shooting, snowmobiling and fishing. Hoot is survived by his wife of 63 years, Audrey and their children, Edward (Terri) Hooten, James Hooten, Connie (Bernie) Kupper, Scott (Donna) Hooten, David Hooten and Debra Hooten . Hoot is further survived by six grandchildren, seven great grandchildren, and sister-in-law, Doris Hooten in addition to nieces, nephews, cousins, other relatives and dear friends. He was preceded in death by one son, Michael Hooten on June 20, 2011; brothers, Edward, Alvin, Clifford and Clarence. Hoot’s visitation will be held at West Lawn Memorial Park Chapel, 9000 Washington Ave (Hwy 20) Racine, WI on Friday August 24, 2018 from 10:30 am until 12 noon. Following the visitation Hoot will be laid to rest in a private ceremony.

The family of Robert "Hoot" Hooten created this Life Tributes page to make it easy to share your memories.

Send flowers to the Hooten family.