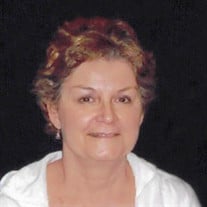 Robin Lee Schwarm RACINE - Robin Lee (nee: Blom) Schwarm, 65, passed away on Tuesday, April 24, 2018 at Ascension All Saints Hospital. She was born in Racine on August 20, 1952, the daughter of the late Marvin and Yvonne (nee: Vitsos) Blom. Robin was a 1970 graduate of J.I. Case High School. She then went on to earn her Associate's Degree in Nursing at Gateway Technical College. Robin worked as a pediatric registered nurse for Ascension All Saints for 38 years. On February 14, 1975, Robin was united in marriage to Gary Schwarm. She was a member of FaithBridge Church at the Franksville campus. Robin loved horseback riding and crafting, especially knitting, crocheting, and rug-making. Surviving are her husband of 43 years, Gary Schwarm; children, Kate (Paul) Kempf, and Karl Schwarm; grandchildren, Logan and Ellie Kempf; half brothers, Tom (Donna) Morse, and Dale (Sherry) Rutledge, uncle, Kelly (Sandy) Hall, and her mother-in-law, Joyce Schwarm. She is further survived by other relatives and friends. Robin was preceded in death by her parents, and father-in-law, Alden Schwarm. Memorial services for Robin will be held at Sturino Funeral Home on Thursday, May 3, 2018 at 4:30 p.m. There will be a visitation at the funeral home from 2 p.m. until the time of service. Robin will be laid to rest at Southern Wisconsin Veterans Memorial Cemetery at a later date. Memorials can be made to the American Cancer Society in honor of Robin. We would like to give a special thank you to Dr. Mullane and his staff, and the staff at Ascension All Saints for the truly wonderful, loving care that they gave Robin.

The family of Robin L. Schwarm created this Life Tributes page to make it easy to share your memories.

Send flowers to the Schwarm family.