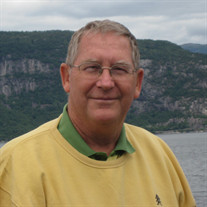 Roger Bruce Exner, 75, of Racine, passed away peacefully on Friday June 15, 2018, at home with his family by his side, following a courageous battle with cancer. Roger was born to Ervin and Alma (Splett) Exner, December 11, 1942, in Racine, WI. He attended several local Lutheran elementary schools, last attending Lutheran High School. He was a PFC in the US Army serving in Alaska from 1964 -1966. Roger was united in marriage to Carol Anderson on May 11, 1968. They went on to build a life together in Racine. Together they raised three children, which have given them 8 grandchildren, 1 great-granddaughter and countless memories. Roger was employed by SC Johnson for 35 years, retiring in 2005 as a Chemical Processing Operator. He was a part-time EMT/ firefighter for Mt. Pleasant Fire Department for 21 years, retiring in 2005. After retirement he grew restless and went back to work at Armstrong Park, where he took great pride in being part of the grounds maintenance crew for 4 years, not retiring until his illness forced him to in 2017. Roger was active in many organizations. He was involved in the Racine JayCees, Boys of ’76 Drum & Bugle Corp playing trumpet, Tribal Chief of YMCA Indian Guides/Princesses, coached his son and daughter’s soccer, softball, and basketball teams, member of Racine County Conservation League (enjoyed volunteering at River Bend Nature Center), Johnson Wax 20 Year Club, foster parent, along with his wife, for 12 years for pre-adoptive infants through Children’s Service Society and a member of Faithbridge Church (formally Franksville United Methodist) for 50 years. He was President of the Mens Club for many years, served as Trustee, usher, Holy Communion server and part of many committees. Roger enjoyed spending time with his family, watching and playing sports, golf, camping, golf, keeping his yard immaculate, golf (especially with his MEW’s brothers), trips to Door County with his beloved Gourmet Group, and traveling. Roger will be deeply missed by his wife of 50 years, Carol Exner, his children: Brian Exner (Tanya), Tanya Butler of Racine, and Katy Exner of Franksville. One sister, Jackie Richey (Dave), sister in-law, Shirley Vnuk (Paul), and brother in-law, Gary Anderson (Kathy). Grandchildren: Jose and Amanda Heredia, Charlie and Daniela Exner, Nicholas Exner, Jordan and Caleb Butler, Taelyn Biagas, great-granddaughter, Leila Heredia. Many nieces, nephews and friends, too many to count. We will forever admire his strong faith, devotion to family, sense of humor and his tireless work ethic. He was greeted in heaven by his parents, Ervin and Alma Exner, father and mother in-law, Carl and Ann Anderson, two brothers, Duane and Erville Exner, brother in-law, John Meldgaard, sisters in-law, Minnette Exner and Vonnie Exner-Vojta. Visitation will be held on Tuesday, June 19, 2018 from 4:00pm-7:00pm at Faithbridge Church, 10402 Northwestern Ave. Franksville, WI. A funeral service will be held on Wednesday, June 20th at 11:00am, with visitation from 9:30am until the time of service at Faithbridge Church. In lieu of flowers, donations can be made to River Bend Nature Center or HALO Homeless Shelter, both in Racine. The family would like to send a special thank you to Dr. Michael Mullane and staff and Hospice Alliance for the compassionate care that was provided to Roger and his family.

Roger Bruce Exner, 75, of Racine, passed away peacefully on Friday June 15, 2018, at home with his family by his side, following a courageous battle with cancer. Roger was born to Ervin and Alma (Splett) Exner, December 11, 1942, in Racine,... View Obituary & Service Information

The family of Roger B. Exner created this Life Tributes page to make it easy to share your memories.

Roger Bruce Exner, 75, of Racine, passed away peacefully on Friday...

Send flowers to the Exner family.