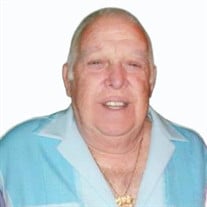 RACINE - Ronald Lyle Baer, 77, passed away on Monday, May 24, 2021. He was born in Bloomington, Illinois on February 22, 1944, the son of the late Lyle and Anna (nee: Williams) Baer. On July 12, 1968, Ron was united in marriage to Carol Barina. They later had a church ceremony on October 28, 1977. Ron served in the Unites States Army during Vietnam. He was a firefighter for the city of Racine for 29 years, retiring in 1999. Ron loved his family and caring for his grandchildren. He enjoyed playing cards, especially Texas Hold 'Em, golfing, going camping, vacationing in Hawaii, sitting outdoors and enjoying nature, and watching TV and movies with Carol. Ron was a loving father to Robbie (Corrine) Baer, Tammy (Tony) Jakovec, and Ryan (Jenny) Baer; loving papa to Brooke (Alex) Pliska, Brandon, McKayla, McKenzie, Aubreyana, Maverick, and Bri Bear, (daughter of Renee and Brian Candido) and loving brother to Sandra Baer and sister-in-law, Kathy Baer. He is further survived by nieces, nephews, other relatives and friends. Ron is preceded in death by his wife, Carol on August 15, 2018, and his brother, David Baer. A memorial visitation will be held at Sturino Funeral Home on Thursday, May 27, 2021 from 4 p.m. until 5 p.m. He will be laid to rest, in a private ceremony, at West Lawn Memorial Park with full military honors.

The family of Ronald Lyle Baer created this Life Tributes page to make it easy to share your memories.

Send flowers to the Baer family.