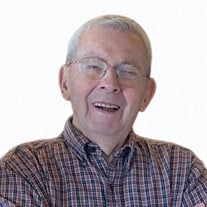 RACINE August 16, 1934 - February 9, 2021 Ron Weitkum, 86, passed away at his home unexpectedly on Tuesday, while doing what he loved, taking care of his birds. Born on August 16, 1934, he was the 6th of 7 children born to Gustav H. Weitkum and Esther I. (Felbob) Weitkum. He was born in Racine in the old St. Mary's hospital that is now part of the SC Johnson complex, where he would later retire from after a 41-year career. Ron attended Garfield School and Horlick in Racine and later joined the Marine Corps during the Korean War. After a two-year engagement, he was united in marriage on July 17, 1965 to Edith A.M Franti at a small church in her hometown of Ewen MI. He was a lifelong Racinian, an original member of St. Andrew's Lutheran Church and later a member of Prince of Peace. Ron loved to golf, his garden, his apple trees and in his later years, loved feeding and watching his birds. Always known for his wit, he was the jokester in pretty much any group and was generous with his time to anyone who knew him. Ron is survived by his wife, Edie; children, Dawn (Frank) Marano, John (Michelle) Weitkum; grandchildren Nick (Jen) Marano, Jamey (David) Mogilka, Lizzie Fletcher, Carly Marano & Justin Weitkum; sister-in-law, Bert Young, brother-in-law, Ken Franti and many, many good friends (of special mention Jean & Gil Bauman) and other relatives. He was preceded in death by his parents; brothers, Robert, Kip (Clifford), Glenn & Norman; sisters, Jean Dykstra & Doris Hancock; sisters-in-law, Shirley, Beverly & Joan Weitkum and Char (Franti) Nikson; brothers-in-law, Brad Hancock, Harold Dykstra and Leo Nikson; nieces, Debbie McDonald & Marla Wojnarowski and great nephew, Joshua Bressan. The family would like to thank Dr. Gulberg, Dr. Papp and Dr. Murillo. Ron will be cremated, and a family ceremony held at a future time. Gifts to honor of Ron's life may be made to Prince of Peace, 4340 6 Mile Road, Racine WI 53402.

The family of Ronald Weitkum created this Life Tributes page to make it easy to share your memories.

Send flowers to the Weitkum family.