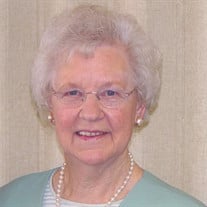 Ruth Ann Kuiper MT. PLEASANT – Ruth Ann Kuiper, age 95, left this earthly world peacefully at home on Wednesday, May 22, 2019, to be with her Lord and Heavenly Savior. Ruth was born in Franksville, WI, to Anton and Elsie (Schilstra) Osinga. She was the 10th of 12 Osinga children, having seven brothers and four sisters. Ruth married Richard J. Kuiper of Franksville on May 10, 1946 in the Racine Christian Reformed Church. They recently celebrated their 73rd anniversary. The couple farmed for 45 years on Hwy. 20 and raised three children. In 1993, they moved to a new home and farmette nearby to enjoy their retirement years. Ruth enjoyed playing softball during her late teens and early twenties. She, along with some co-workers, friends and relatives, joined the Oster factory team. Ruth was the pitcher, and in 1946, the team won the Racine City Tournament! She loved to watch “A League of Their Own” and reminisce about the days when women’s teams (like the Racine Belles) were popular while the men were at war. She was actively involved in her church spending several years as a GEMS counselor and many years in the Dorcas Society, helping with many church events. In her 60s and 70s, she enjoyed bowling with a group of ladies from church. Later in life, she and Richard traveled to Europe (Germany and Switzerland) and took a trip to the Netherlands with Ruth’s sisters, seeing some of the towns where their parents had immigrated from. Ruth was preceded in death by her parents; brothers: Dowie, Peter, Jim, John, Art, Fred and Joe, and their spouses; sisters: Rose Nowak, Effie (Zimmerman) Wynkoop, Bertha Fiedler, and Ann Anderson and their spouses; brother-in-law, William Kuiper; sisters-in-law: Flossie Kuiper, Annette Kuiper, and Maggie Kuiper. She is survived by her husband, Richard; children: Cyndi (Mike) Owens, Marcia (Ken) Brondyke, and Dennis Kuiper; grandsons: Jason and Kevin Owens, Philip (Stacy) Brondyke, and Glen (Noelle) Brondyke; great-grandchildren: Lauren and Anna Brondyke and Betsy and Will Brondyke; brothers-in-law: Henry (Pauline) Kuiper, John Kuiper, and Clarence (Marcella) Kuiper; and sister-in-law: Sharon Osinga. Funeral services will be held at 11am on Wednesday, May 29, 2019 at the Racine Christian Reformed Church, 900 Illinois Street, Racine. Pastor Anson Veenstra will be officiating. Burial will follow at West Lawn Memorial Park, 9000 Washington Avenue. Visitation will be held at the Racine Christian Reformed Church on Tuesday, May 28, 2019 from 4:30 to 6:30pm and at the church on Wednesday from 10 to 10:45am preceding the service. In lieu of flowers, memorials may be given to the Racine Christian School Endowment Fund, 912 Virginia Street, Racine WI 53405.

Ruth Ann Kuiper MT. PLEASANT &#8211; Ruth Ann Kuiper, age 95, left this earthly world peacefully at home on Wednesday, May 22, 2019, to be with her Lord and Heavenly Savior. Ruth was born in Franksville, WI, to Anton and Elsie (Schilstra) Osinga.... View Obituary & Service Information

The family of Ruth Ann Kuiper created this Life Tributes page to make it easy to share your memories.

Send flowers to the Kuiper family.