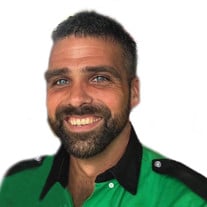 Ryan Nicholas Clark New Berlin - Ryan Nicholas Clark, 33 of New Berlin, formerly of Kenosha passed away at his residence on Saturday, November 16, 2019. Addiction took hold of Ryan early in his life and refused to let go, despite his efforts to break free. He was born in Milwaukee on June 26, 1986, the son of Rob and Mary Jo (nee: Sturino) Clark. Ryan was a 2004 graduate of Tremper High School. He played volleyball and soccer, sang in the choir, and participated in the Madrigals. He was also very active in the Theatre Arts program from Bradford High School. Ryan was a performer with the Doo-Wop Daddies for more than nine years. He loved performing in all musical forms. He especially loved Doo-Wop music, as well as the Musical Theatre genre. He was very happy to have had the opportunity to perform with the Racine Theatre Guild, and was very fortunate to have performed with the Kids from Wisconsin for two seasons as well. He is survived by his parents, Rob and Mary Jo Clark, sister and brother-in-law, Rachel (Jon) Novak and three nephews, Franklin, Donovan and Brendan. He is also survived by the light of his life, his three year old daughter, Raelynn Jo Clark. Ryan is further survived by other relatives and many friends. He is preceded in death by his brother, Brendan Michael Clark, his grandparents, Jay and Amanda Rasmussen and Sam and Helen “Boots” Sturino. He was also preceded by his uncle Jay Rasmussen, Jr. There will be a time for family and friends to meet at Sturino Funeral Home on Friday, November 22, 2019 from 3 p.m.to 7 p.m. Ryan will be laid to rest in a private ceremony. In lieu of flowers, those who wish to remember Ryan in a special way may direct memorials for his daughter, Raelynn. Please forward those memorials to Rob and Mary Jo Clark. If you have someone you love who is battling addiction, please help them find the help they need.

Ryan Nicholas Clark New Berlin - Ryan Nicholas Clark, 33 of New Berlin, formerly of Kenosha passed away at his residence on Saturday, November 16, 2019. Addiction took hold of Ryan early in his life and refused to let go, despite his efforts... View Obituary & Service Information

The family of Ryan Nicholas Clark created this Life Tributes page to make it easy to share your memories.

Send flowers to the Clark family.