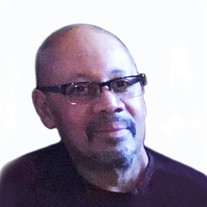 Sammy D. Farris resident of Racine, passed away early Saturday morning, January 16, 2021, Sammy Dean Farris passed from here to eternity to be healthy and whole again. Sammy’s health began to fail about ten years ago when he was diagnosed with heart disease. Since this health diagnosis, Sammy, trusting in our LORD Jesus Christ, fought the good fight of faith, living each day as if it were his last. Sammy, the “athletic of the family” demonstrated excellent athletic skills throughout most of his life. During his high school years at William Horlick High, he was known as an exceptional long-range shooter. This standing earned him a scholarship to attend UW-Stout. Sam graduated from William Horlick High School. Sammy was employed at several Racine companies after graduation. His longest employment was with Western Publishing before they ceased operations in Racine. Sammy never met a stranger. He looked forward to his daily walks with his beloved dogs Roscoe and Willie, during which he would talk with many of his neighbors. With extreme passion, he also enjoyed conversing about the most recent Cubs or Bears games. Sam was an avid sports fan. Sammy is preceded in death by his daughter; Samantha Farris; his parents, Samuel and Lalar Farris; one brother, Sandy Farris; his mother-in-law, Shirley Romeo; one brother-in-law, James Moratto. Sammy is survived by his wife, Kimberley Griffin; daughter, Sicarra Farris; son, Darnell Freeman; grandchildren, Iyanna Griffin, Braylon Farris and Alivia Meier-Farris; brothers, Larry (Gardenia) Farris, Ronald Farris, Woody (Suzanne) Farris; sisters, Diana Farris and Jean (Richard) Parra. A public visitation will be held at Sturino Funeral Home on Saturday, January 23, 2021 from 1:00 to 2:00 p.m. Private family service to follow. Online condolences to www.sturinofuneralhome.com

Sammy D. Farris resident of Racine, passed away early Saturday morning, January 16, 2021, Sammy Dean Farris passed from here to eternity to be healthy and whole again. Sammy&#8217;s health began to fail about ten years ago when he was diagnosed... View Obituary & Service Information

The family of Sammy Dean Farris created this Life Tributes page to make it easy to share your memories.

Send flowers to the Farris family.