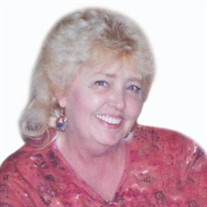 Sandi-lane (nee: Martin) Eichler, 71, of Racine, passed away on October 14th, 2021, after a brave, and courageous battle with Metastatic Lung Cancer. She was born on July 6th, 1950, to James R and Janice (nee: Krinkey) Martin. Sandi-lane was united in marriage to the love of her life, Michael W. Eichler on February 14th, 1986. Sandi-lane was a 1968 graduate of Horlick High School. With a flair for cooking and business, she started Catering by Sandi-lane and became a small, but well-known caterer in the Racine area, during the late Seventies through the late Eighties. Always eager to put a smile on your face, she found a new calling in the service industry, and worked serving at Hamzi’s Restaurant for well over twenty years, and would later retire after many years at Castlewood Restaurant in Sturtevant. Sandi-lane is survived and will be deeply missed by her beloved husband Michael, son David (Bobbie Jo) Martin of Racine, and daughter, Amy Jo Csipkes of Yuba City, CA. She is survived by 4 sisters, Sherrell Martin, Diane Frye of Racine, Lori Ammons of Milton, Fla., and Jana (Alex) Joseph of New Port Richey, Fla.; three brothers, Dayne Martin, Jamie (Candace) Martin of Racine, and Jay (Jenny) Martin of Enterprise, Ala. She is further survived by her Grandsons Matthew Martin, PJ Schroeder, grand-daughter Christina (Brandon Joplin) Ferg, and great grandchildren Damarion, Dalaynee, Nova and Amirah, and too many Relatives and Awesome Friends to mention. Sandi-lane was preceded in death by her parents, Jim and Jan Martin, her sister Lisa Jackson and brother-in law, Bob Jackson. In keeping with Sandi-lane’s wishes, cremation has taken place. A Memorial Service in Sandi’s honor will be announced at a later date. In lieu of Flowers, those wishing to remember Sandi in a special way, may direct memorials to American Cancer Society. Special thanks go out to the awesome Dr’s and staff at Ascension Cancer Center of Racine and the dedicated and caring staff at Compassus Hospice, for allowing us to keep Sandi-lane at home, surrounded by Love.

Sandi-lane (nee: Martin) Eichler, 71, of Racine, passed away on October 14th, 2021, after a brave, and courageous battle with Metastatic Lung Cancer. She was born on July 6th, 1950, to James R and Janice (nee: Krinkey) Martin. Sandi-lane was... View Obituary & Service Information

The family of Sandi-lane Eichler created this Life Tributes page to make it easy to share your memories.

Send flowers to the Eichler family.