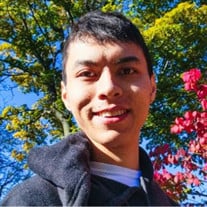 Sebastian Andrew Shaw, age 23, passed away peacefully in his home on May 4th 2022 surrounded by his devoted parents, Andrew and Marion. He is survived by his sisters Julia Andretti (and husband Chris), Katarina Carlos (and husband Joe), and Teressa Shaw, along with his nieces, Tori and baby girl Andretti, grandparents Phyllis and Don Shaw, Jean and Robert Masters, and Mira Patterson, aunts, uncles, cousins, and friends Binh Le and Erick Nilsen. Sebastian was born in Milwaukee, Wisconsin on July 1st 1998. He brought immense joy to his family. Sebastian and Teressa were best friends through childhood and did nearly everything together. He was a high-spirited individual with contagious energy and a quirky sense of humor. Sebastian appreciated the simplest moments and frequently remarked, "This is the best day of my life." Armed with an insatiable curiosity, Sebastian pursued many studies including Korean language, filmmaking, photography, poetry, computer programming, tai chi, meditation, and nutrition. He also enjoyed learning about different cultures and learned to make Korean kimchi and Turkish coffee. At the age of 17, Sebastian rose to the rank of Eagle Scout after completing the restoration of a Vietnam-era Army Helicopter in Merton, Wisconsin. He wrote and published a complete book of poems entitled, "American Teenager Poems". In 2016, he served as campaign manager for his father’s alderman race, running media accounts and raising substantial funds. At the age of 20, Sebastian wrote and directed a full-length documentary with his father called, "Mira: Seeking a Presidential Pardon." While filming, Sebastian fulfilled a lifelong dream of visiting South Korea. He worked at Shaw Law Offices as the technology consultant. Following his cancer diagnosis in 2021, Sebastian started a YouTube Channel named, “Pluck the Day” where he documented his experience living with cancer and fostered an international community of hope, love, and support. Sebastian enjoyed eating out with family and friends, reading books at coffee houses, and walking the family dog, Keebler. He loved to dance, listen to classical and European folk music, and had a beautiful operatic singing voice. In his final year, Sebastian attended Andrea Bocelli’s concert with his father and called the performance “magical.” Sebastian was fueled by his desire to make the world a better place. He demonstrated this daily, opening doors for others, “paying it forward” at Starbucks, or mowing the neighbors’ lawns. He was the embodiment of selflessness and generosity to his family, friends, and those who were fortunate enough to cross paths with him. Sebastian was the best son and brother in the world. He was a beautiful gift to all who knew him. Sebastian’s family dedicated a bench in his honor located in one of his favorite places, Veterans Park along Lake Michigan in Milwaukee, Wisconsin

Sebastian Andrew Shaw, age 23, passed away peacefully in his home on May 4th 2022 surrounded by his devoted parents, Andrew and Marion. He is survived by his sisters Julia Andretti (and husband Chris), Katarina Carlos (and husband Joe), and... View Obituary & Service Information

The family of Sebastian Andrew Shaw created this Life Tributes page to make it easy to share your memories.

Sebastian Andrew Shaw, age 23, passed away peacefully in his...

Send flowers to the Shaw family.