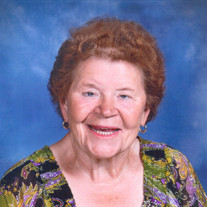 RACINE - Selma (nee: Keitel) Kowalski, 84, passed away on Sunday, September 15, 2019 at The Woods of Caledonia. She was born in Germany on April 2, 1935, the daughter of the late Wilhelm and Auguste (nee: Nuremberg) Keitel. On May 19, 1956, Selma was united in marriage to Heinz Kowalski at First Evangelical Lutheran Church. She was employed as a supervisor at Lake Electric Motors for over 25 years. Selma was a long- time member of First Evangelical Church. She enjoyed gardening and collecting Hummel figurines. Surviving are her sons, Rickie (Briselda) Kowalski, and Randy (Stefanie) Kowalski; grandchildren, Jason (Chris) Kowalski, Heather (Andy) Vallejos, Ryan Kowalski and Samantha Kowalski; great grandchildren, Eli, Sonja, Nathaniel, Evan, and Georgina, sisters; Frida (Wayne) Bose, Erika (Jim) MacDougall and sister-in-law, Julie Keitel. She is further survived by nieces, nephews, other relatives and friends. Selma was preceded in death by her husband, Heinz on March 23, 2004 and brother, Helmut Keitel. Funeral services for Selma will be held at First Evangelical Church, 728 Villa St, 53403, on Saturday, September 21, 2019 at 11 a.m. Visitation will take place at the church from 10 a.m. until the time of service. Selma will be laid to rest next to her husband at West Lawn Memorial Park.

The family of Selma Kowalski created this Life Tributes page to make it easy to share your memories.

Send flowers to the Kowalski family.