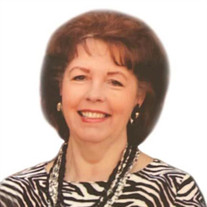 RACINE-Sharyn Jean Rhoads, 80, passed away on Monday, January 3, 2022 at Shorehaven Senior Living in Oconomowoc. She was born in Bensenville, Illinois on November 8, 1941, the eldest daughter of John and Evelyn (Anderson) Axen. Sharyn was united in marriage to Merritt A. Rhoads in Biloxi, Mississippi on December 16, 1961 while Merritt was stationed at Keesler Air Force Base. Together they had two children, Deanne and David. She was a long-time member of Raymond Baptist Church and hosted a women’s Bible study and enjoyed many friends, including her dear friend Betty Gruenwald. Sharyn had a strong love for the Lord, her family, and her home. She enjoyed primitive antiques, which she collected and used to decorate her home of almost 50 years in Franksville. Sharyn is survived by her husband of 60 years, Merritt Rhoads; children, Deanne (Jay) Zawerschnik and David (Dennise) Rhoads; grandchildren, Megan, Kara, Rachel, Lauryn and Nathan, 13 great grandchildren; sister, Lisa (Ed) or Smerchek and sister-in-law, Dianne Axen. She is further survived by nieces, nephews, other relatives and friends. Sharyn will be missed by many. Preceded in death by her brother, Curt Axen on September 3, 2021 and her parents. Funeral services will be held at Sturino Funeral Home on Monday, January 10, 2022 at 11 a.m. There will be a visitation at the funeral home from 10 a.m. until time of service. She will be laid to rest at Caledonia Memorial Park. Memorials to American Alzheimer’s Association have been suggested by the family. The family would like to extend a special thank you to the staff of Shorehaven Senior Living for their loving and compassionate care and making her final days more comfortable.

RACINE-Sharyn Jean Rhoads, 80, passed away on Monday, January 3, 2022 at Shorehaven Senior Living in Oconomowoc. She was born in Bensenville, Illinois on November 8, 1941, the eldest daughter of John and Evelyn (Anderson) Axen. Sharyn was... View Obituary & Service Information

The family of Sharyn Jean Rhoads created this Life Tributes page to make it easy to share your memories.

Send flowers to the Rhoads family.