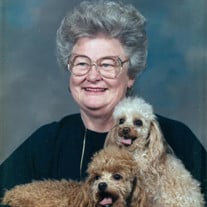 Suzanne E. (nee: Christensen) Cooper Suzanne E. (Christensen) Cooper, 86, passed away at Lakeshore of Siena on Thursday, June 11, 2020. She was born in Racine, WI on August 16, 1933 to Elizabeth (Olson) and Martin Christensen and resided in Racine, WI most of her life. She graduated from Park High School in 1951. On May 9, 1959 she was united in marriage to William Cooper. Suzanne volunteered at Lincoln Lutheran Auxiliary for many years and was a member of Sons of Norway. She was a Municipal Clerk for Racine County and participated in many elections in the county over the years. Suzanne also was an avid racing enthusiast and worked as a registrar for the Sports Car Club of America in Road America in Elkhart Lake. Suzanne owned “The Needleworks” shop for many years in Racine and opened a 2nd shop in Door County as well. Suzanne is survived by one sister, Karen Hammann of Franksville and one step-son, Gerald (Nicky) Cooper 0f Australia, one step-grand daughter, Abigail Cooper, two nieces, Elizabeth Hammann and Katherine Sterling; four great nieces and nephews, Richard and Sara Sterling, and Perry and Shelby Carman; longtime friends, Bonnie and Lance Chady, in addition to other relatives and friends. She was preceded in death by her parents; her husband, William; daughter, Anna Lisa Cooper; brother-in-law, Richard Hammann; niece, Karen (Hammann) Carman. Private family services were held at an earlier date. In lieu of flowers, memorials suggested to Racine Zoo, Holy Communion Lutheran Church Food Bank or to one’s favorite charity.

The family of Suzanne E. Cooper created this Life Tributes page to make it easy to share your memories.

Send flowers to the Cooper family.